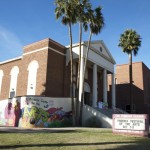 Spirit of the Arts
A Unique Community Project to Beautify Downtown

Local and nationally acclaimed artists from all mediums have been commissioned to convert discarded rum bottles from The Breadfruit & Rum Bar into works of art. These works will then be auctioned at the Spirit of the Arts restoration gala. A portion of the proceeds will go directly towards the improvement of the building. Spirit of the Art tickets cost $75 each and can be purchased by visiting phoenixcenterforthearts.org/spirit

For more information about Phoenix Center for the Arts, visit phoenixcenterforthearts.org or call 602-254-3100.