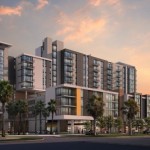 PORTLAND ON THE PARK TO CELEBRATE GROUNDBREAKING APRIL 7

Portland on the Park, the highly anticipated sister property to Downtown’s award winning Portland Place, will celebrate its groundbreaking on Tuesday, April 7 at 5 p.m. Mayor Stanton, Councilman Nowakowski and other Phoenix civic leaders, along with executives from Habitat Metro, Sunbelt Holdings, and DAVIS Architecture, will take part in the onsite ceremony. A hosted reception will immediately follow at the development’s Sales Gallery, which will include small plates from FEZ, wine from Aridus Wine Company and beer from The Phoenix Ale Brewery. Portland on the Park is located between the three-acre Portland Park and the 32-acre Margaret T. Hance Park along Central Avenue. It will consist of 149 residences ranging in size from 745 to 2,490 square feet, with 21 floorplan options. High-end touches including, quartz counters, engineered hardwood flooring soft-close cabinetry and frameless glass showers come standard in all Tower Residences, Club Residences and Penthouse Suites. Each residence also includes a fully-equipped kitchen featuring stainless steel, German-engineered Bosch appliances. All residences are connected to state of the art fiber optic high speed internet providing commercial standard IT connectivity.

“As the first major condominium development to break ground in recent Downtown history, Portland on the Park has already garnered tremendous interest,” said David Newcombe of Habitat Urban, designated broker for Portland on the Park. “There is increasing demand to live in Downtown Phoenix and this project gives buyers the opportunity to live an urban lifestyle in the heart of the Central Arts District, with the 32 acre Hance Park as your backyard and light rail access steps away.” “The property’s design was influenced by the intent to create a sense of place from its 3,200 square foot ‘communal third place’ lobby for coffee meetings or end of the day drinks to the roof lounge atop the 14-story tower offering unrivaled views of Downtown and the Valley’s mountain vistas,” relates developer Tim Sprague of Habitat Metro. “In addition to complementary commercial space, our mid-rise urban community uniquely features multiple common areas including a resort-like pool, a fully equipped fitness facility, community barbeques and fire pits, and the “Nest,” a getaway patio cut into the fourth and five floors of the 14-story tower over looking the Japanese Friendship Garden.”

Portland on the Park construction will begin immediately following the groundbreaking ceremony, with completion slated for the second half of 2016. Tower and Loft Residences pricing starts in the low $200,000s, with Penthouse Suites available under $1 million.

Image renderings courtesy of Portland on the Park.