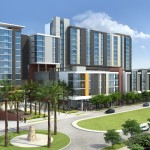 Portland on the Park, the sister project to award-winning Portland Place, will begin construction by the end of the year with an anticipated completion of mid-2016.

Nestled between Hance Park and the Portland Parkway, the project will feature a combination of 170 lofts and finished condominiums with prices ranging from the $200,000 to just less than $1 million. The lofts will be true to the urban experience, with exposed metal ductwork giving a modern appeal to a comfortable space. The finished condos will offer one, two and three bedroom option. Units will range in size from 745 to 2,381 square feet with 21 different floor plans. To complete the project, which is valued at over $75 million, Habitat Metro principal, Tim Sprague, has assembled an expert development team that includes Sunbelt Holdings; the DAVIS Architecture team responsible for the award-winning design of Portland Place; and Designated Broker David Newcombe of Habitat Urban. Additionally, urban living and lifestyle specialists Braun Allison from Vancouver and Scottsdale-based The James Agency are managing marketing and public relations.

Portland Place Condos are phase one of the development, and they were completed in 2007. Sprague has no doubt kept himself busy since then, including helping create affordable housing for artists at Oasis on Grand. But, seven years is a long time for any sequel. So, what took so long to get this phase two off the ground?

“One word pure and simple, ECONOMICS,” said Tim Sprague, principal of the project developer, Habitat Metro. “Since Portland Place was built, we’ve weathered the Great Recession, and downtown Phoenix has rapidly matured. We have new quality restaurants, the ASU Downtown Campus, CityScape, the Phoenix Biomedical Campus, etc.” He added, “In essence, downtown is growing a real urban environment, growing past its adolescence.” The fourteen-story residential tower will feature ample bike storage, electric car charging stations, a state-of-the art workout center, and an open-air gathering spot on top of the building, which will provide unobstructed views of the Japanese Friendship Gardens, Hance Park, the mountain vistas, and the surrounding historic neighborhoods. In addition to the residential units, the ground floor will be home to a coffee shop, wine bar and restaurant.

The “Location. Location. Location.” adage definitely applies here. “Very few residences, no matter what city, have the privilege/good fortune to be located between two parks. Residences on a park are always associated with a quality life style, no matter what city: New York, Chicago, Philadelphia, etc. Portland on the Park provides that same qualitative difference for Phoenix,” said Sprague.

Additionally, the Central Avenue and Portland Street area scores a “very walkable” 86 rating on WalkScore.com. “With a metropolitan mix of arts and culture, nightlife, boutiques, restaurants and sporting events, downtown Phoenix is blossoming into the true epicenter of the Valley,” said Sprague.

Broker David Newcombe shares a glimpse of the residential market. “It’s close to a decade since anyone broke ground on a major condominium project in Downtown Phoenix,” he said. “There is clear demand to live in our new and thriving downtown, with very few exceptions all the buildings we have are now full. Urbanization is changing the way we live, work and think in a way that Arizona has never seen before.”

If urban living on a park in the heart of our rapidly evolving downtown appeals to you, take note of Portland on the Park. Reservations will begin midsummer, with pre-sales beginning in the fall.