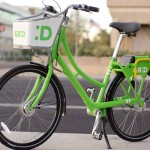 “I’m a proud member of Grid Bike Share and these statistics only reinforce what we expected when we started the program,” Mayor Greg Stanton said. “These bikes are not only a fun, quick way to get around town, but they show that Phoenix is a progressive city. Being multi-modal — having light rail, and walkable, bike-friendly streets — is key to attracting new businesses and employees.”

The system initially launched with 100 bicycles and 27 bike-share stations. Within the first quarter, the fleet of bicycles was more than tripled and the number of stations was almost doubled.

Grid Bike Share also continues to remain the largest system in the U.S.with smart-bike technology. This technology allows Phoenix residents and visitors to conveniently reserve and return a bike from public bike racks in addition to Grid stations. It also allows riders to track usage-time, mileage, carbon offset, calories burned and gas savings. During the first quarter, the system helped offset an estimated 11,700 poundsof carbon and its riders together burned 530,100 calories.

The system also registered 2,250 members. An estimated 11,000 trips and approximately 14,075 miles were traveled via the bright-green bicycles. The largest spike in trips occurred over the Super Bowl and Valentine’s Day weekends and the bike-share stations located in downtown adjacent to the Phoenix Public Market and CityScape generated the most trips.

“The swift growth of Grid Bike Share is to be commended. It also clearly demonstrates the need to connect our multimodal city and strengthen our transportation infrastructure,” said Councilwoman Thelda Williams who chairs the City Council Transportation and Infrastructure Subcommittee. “Bicycling, streets, buses and light rail are all components in a connected system that work together to efficiently get people where they need to be in a convenient way.”

Plans are underway to double the system in size to 500 bicycles and 50 stations by the next quarter. Grid Bike Share also will soon be expanding into Mesa and Tempe to make it a true regional transportation system.