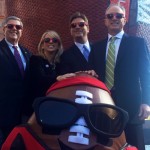 With 83 days until the kick-off of Super Bowl XLIX, the Arizona Super Bowl Host Committee and Visit Phoenix today unveiled a super-sized football mounted in Downtown Phoenix, which will serve as the cornerstone for Super Bowl Central. Towering more than 20 feet high, it measures more than 32 feet around, and weighs in excess of 7,000 pounds.

“This massive installation for Super Bowl XLIX stands for the fun and lasting memories in store for fans, and for the heightened profile and lasting benefits for Arizona as we welcome our third Super Bowl in 19 years,” said Jay Parry, President and CEO of the Arizona Super bowl Host Committee.

Located at the northwest corner of Washington Street and Central Avenue, the enormous football made of 7,000 pounds of steel, as well as wood and foam, is 2,000 percent larger than a regulation football.

“Super Bowl Central is a postcard from downtown Phoenix to the world,” said Win Holden, chair of Visit Phoenix. “This super-sized football not only marks the epicenter of downtown Phoenix’s fan experience, but it’s destined to star in scores of selfies and social-media posts.”

Fans are invited to take their photos in front of the newly installed giant football and share them on social media using #SB49.