Suns Spot | Looking on the Bright Side of the Suns 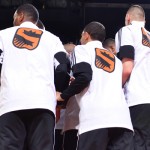 What a difference a year makes. As the Suns entered the 2013-14 campaign, the prognosticators were all in agreement that they would finish at or near the bottom of the Western Conference with one of the worst records in the league.

Well, we all know how that turned out. They were the feel good story of the season, posting the league’s largest increase in wins from the previous year, and playing the fast paced, exciting basketball that Suns fans had grown accustomed to during the Nash, Barkley and KJ years. With 48 wins, they missed the playoffs by a single game in the brutal West. As we enter the new season, those same experts are again predicting the Suns won’t make the playoffs and most have them winning fewer games.  The focus seems to be on what the Suns don’t have, what they aren’t. “They are too small.” “They don’t have enough experience or depth in the front court.” “They will miss Channing Fry’s three point shooting on offense and his length on defense.” “Everyone had career years last year and no way will they all match that same production this season.” “They have too many guards, they won’t be able keep them all happy.” Blah blah blah.

This focus on the negative has national media missing the point (pun intended). There are several reasons to really like this team, and even expect them to be better this year.

As a Suns fan, I can’t wait to watch this team play this season.  I hope you will join me in focusing on everything there is to like about this talented group.  Fasten your seat belts, this is going to be quite a ride!

Opening Night Promotion: 15,000 fans in attendance will receive a free Suns home opener t-shirt, courtesy of Coca-Cola and Fry’s Food Stores. Prior to tipoff, fans can enjoy music, face painting and a slam dunk competition. Limited tickets are still available and can be purchased at Suns.com.