A Letter From Jim Ballinger 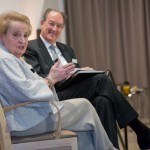 What a difference a decade can make! It has been incredibly gratifying to see the work of so many people that has resulted in today’s vibrant downtown. I have worked at Phoenix Art Museum at the northeast corner of Central Avenue and McDowell Road for the past forty years, and my wife Linda and I are residents of the Willo historic neighborhood so we’ve had an additional ringside seat to watch it all happen. We at the museum will continue to invest in helping further the success of our arts community and neighborhoods. When I look back on the growth that Phoenix Art Museum has experienced since I started here in my twenties – in physically expanding from the original 72,000 square feet to the 285,000 square feet it is today, as well as expanding our collection, our budget, and our reputation both nationally and internationally – it is tremendously satisfying. There have been many milestones during my years at the museum. For me the most critical may have been with the City of Phoenix Bond Election in 1988. That was the launching point for the museum’s growth, and transformative to the entire arts community of Phoenix. I’m proud to have played a key role in that election and to have served as Treasurer for two City of Phoenix Bond Programs. Funds from the bond allowed Phoenix Art Museum to create and expand the Steele Gallery, Cummings Great Hall, JP Morgan Chase Lobby, Harnett Gallery and Whiteman Hall and to prepare for our first “blockbuster” exhibition, Splendors of Ancient Egypt in 1998, that attracted sellout crowds. We followed with other hit exhibitions including Monet at Giverny in 1999 and Secret World of The Forbidden City: Splendors from China’s Imperial Palace in 2001.

Five years later, after a $41.2 million campaign that included another cultural bond program, the museum completed our 18-year facilities master plan by opening the Greenbaum Lobby, Dorrance Sculpture Garden and the Marshall, Hendler, Anderman, Marcus, Marley, Brown, Norton and Men’s Art Council galleries in the Katz Wing for Modern Art. Shortly thereafter we opened Rembrandt and the Golden Age of Dutch Art: Treasures from the Rijksmusen, Amsterdam. At that time our acclaimed model program with The University of Arizona’s Center for Creative Photography was unveiled.

As you may have heard, in April 2014 I announced my intention to retire from my position as The Sybil Harrington Director after forty years of working at Phoenix Art Museum. Combined with the fact that I turned 65 this year and Linda and I have our eighth grandchild on the way, I decided it was the right time. As a result, the museum’s board of trustees has initiated a search process to find my replacement that I hope will take the reins of Phoenix Art Museum for the next generation. I plan to remain in my current role as long as necessary to ensure a deliberate, seamless succession process and a smooth transition. Our staff and trustee leadership has always firmly believed in the museum’s mission: bringing great art from all over the world to the people of Arizona to enrich their lives and communities. Our board believes that Phoenix Art Museum should be a leader in the community and that philosophy has allowed me latitude, for which I am most grateful. I have had the privilege of working with many dedicated volunteers, great trustees and incredible staff members who have always worked together for the good of the museum. Many of those people have taught me a lot. With Linda’s support and that of our family we have enjoyed knowing and working with so many people.

I am most proud of how Phoenix Art Museum has served the community beyond our walls including the arts community and neighborhoods of downtown Phoenix. I am particularly grateful for the support I have received from museum members, the community, and many colleagues, and I look forward to watching as the museum continues adding to the cultural quality, enjoyment, and way of life in Arizona.

Phoenix Art Museum is moving forward with a great exhibition schedule planned through 2016, a quality staff, enthusiastic support organizations, and a strong Board of Trustees. It is crucial the museum keep its momentum strong to remain one of the top amenities of downtown Phoenix and specifically the arts community of our wonderful city.