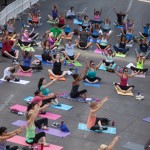 The Downtown Phoenix Journal “Conversation” series consists of interviews with Downtown Phoenix, Inc. (DPI) board of directors and other downtown stakeholders. These interviews are an excellent way to introduce downtown Phoenix leadership to the community, and to learn their respective views on Phoenix. Now let’s read what Cindy Dach of the DPI board, Roosevelt Row CDC, MADE Art Boutique, Changing Hands Bookstore, and more… has to say.

Phoenix is the #2 U.S. destination – right after Las Vegas – to hold trade shows and events according to a new Expo Magazine survey of trade show managers. The other good bit of news from the survey, as reported in the Phoenix Business Journal, is that Phoenix has made significant strides in terms of its reputation as a destination.

Phoenix Sky Harbor International Airport‘s busiest month was even busier this year, with March passenger counts up 3.2% from a year ago despite a late Easter. It is the third consecutive year-over-year gain in passengers this year, an encouraging economic indicator following two years of slight declines in overall passenger counts. Passenger traffic was up 3.8% in January and 2.9% in February.

The Arizona Office of Tourism (AOT) invites you to submit nominations for the 2014 Governor’s Tourism Awards to celebrate outstanding local and statewide tourism achievements. Nomination deadline is Friday, May 16. Click here for details.

A CHANGE IN LANDSCAPE

Last fall, City of Phoenix officials issued a Request for Proposals (RFP) to redevelop the block where the Central Station transit facility now stands at Central and Van Buren streets. The goal is to better utilize this prime downtown parcel with a multi-use development that incorporates public transit elements in the design. An evaluation panel comprised of business, civic, and community representatives reviewed proposals, interviewed finalists, and came to consensus on a project. The City, in agreement with the evaluation panel’s recommendation, selected the proposal from Smith Partners, LLC to advance for negotiation of business terms. Here is a rendering of the proposed project: A half-empty office tower at the southwest corner of Monroe St. and 1st Ave. has been purchased by Rialto Capital Management LLC and a joint venture between Sunbelt Holdings’ John Graham and Ironline Partners LLC. The 19-story, 255,000 square foot building, dually known as 111 West Monroe and the First American Building, sold for $22 million.

New City Church in midtown Phoenix met its fundraising goal to finance a move to a new, larger facility at 1300 N. Central Ave. (across the street from Burton Barr Central Library). The new facility will house a sanctuary for 600 people, children’s gathering space, recording studio, gallery, and coffee bar. A group of Phoenix arts organizations are coordinating their efforts and launching as the new Central Arts District. In a unanimous effort by the burgeoning art institutions located in the area between 7th St. and 7th Ave., Roosevelt and Virginia streets, leadership of these organizations envisioned the opportunity to distinguish the extraordinary concentration of arts in the new district and embrace the businesses within it.

Phoenix City Council Member and DPI Board Member Michael Nowakowski recently gathered some 30 civic leaders to discuss plans and options for a major Hispanic museum and cultural center to highlight the arts and culture achievements of our city’s Hispanic community.

Recently we (the collective we) learned that Jim Ballinger will retire as director of the Phoenix Art Museum. Jim’s foresight and leadership transformed a 72,000-square-foot facility to a 285,000-square-foot amazing experience for art lovers locally, nationally, and globally. We’ll truly miss Jim around Central and McDowell, but know that his influence and involvement will continue to benefit Phoenix for many more years to come.

BEING IN THE KNOW

Our partner organization, Downtown Phoenix Partnership (DPP), has teamed with the Phoenix Convention Center to launch the “Know It All Series,” designed to give sales professionals who are in the business of selling our downtown the tools they need to best serve our visitors. It’s also a great way for industry peers to network while experiencing our wonderful locally owned businesses.

A downtown Phoenix small business was named one of the nation’s ten best start-ups for innovation, entrepreneurship, and creativity by G/O Digital, a Gannett Company. Congrats to Welcome Diner in the Garfield Neighborhood for standing out as one of the most unexpected gourmet culinary experiences around.

Downtown Phoenix fosters an environment where women business owners are increasing in number and influence, says the Downtown Devil. Two pieces of hard evidence: (1) Arizona ranks fourth in the U.S. for economic clout for women-owned businesses and (2) membership in the Phoenix chapter of the National Association of Women Business Owners has increased significantly.

Featured homepage image courtesy of RED Development. Lustre Rooftop Garden at Hotel Palomar is beginning its 100 Days of Summer campaign May 24th and 25th with a Memorial Day pool party.