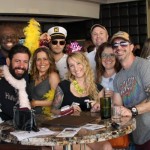 Admit it. You sometimes spell Phoenix wrong. Pheonix. Phoneix. Even the City of Phoenix does too. But it’s going to be pretty hard – and heavy – to make edits on several misspelled cast iron manhole covers spotted by eagle-eyed downtowners. From here on out, as you read this update on downtown Phoenix goings-on, be assured that spell-check is on. A noted local attorney has contributed $10 million to help build Arizona State University’s new Arizona Center for Law and Society, including the future home of the Sandra Day O’Connor College of Law, in downtown Phoenix. The contribution from Leo and Annette Beus is the largest single donation ever to the law school.

Grand Canyon University is housing nearly 200 upperclass students at Roosevelt Point Apartments (3rd St. & Roosevelt) due to a shortage of onsite housing at the university’s 35th Ave. & Camelback campus. Last year, Roosevelt Point housed some GCU students, but on a much smaller scale.

On September 27 (before the rains came), a group of young downtown advocates organized and staged “Better Block PHX” on the block between Pierce and Garfield to demonstrate how existing “dead zones” (e.g., empty lots, vacant storefronts, asphalt parking lots) can be transformed into lively streetscapes, marketplaces, and community hubs. On September 18, the U.S. Federal Aviation Administration changed the west outbound flight path for planes departing from Phoenix Sky Harbor International Airport. The change directs planes to turn at a lower altitude between early afternoon and 2 a.m. over Lower Grand Avenue, rather than a more westerly and higher turn. The public in general and residents of the affected residential neighborhoods specifically were not made aware of the change, resulting in more than 240 noise questions or complaints in two weeks. In comparison, airport officials received 221 such complaints in all of 2013. The FAA and city officials will hold a community meeting on October 16 to discuss the noise complaints and rationale for the change.

City and economic development leaders are touting Phoenix to host one of three NCAA Basketball Final Fours in 2017, 2019, or 2020. Downtown Phoenix is key to the Final Four bid package because of the number of hotel rooms and the Phoenix Convention Center, which would be the site of the National Association of Basketball Coaches convention and the “Bracket Town” fanfest event. This is another great example of the working partnership that has emerged between the Phoenix CVB, Phoenix Convention Center and DPI.

My colleague Dan Klocke with the Downtown Phoenix Community Development Corp. noted in a Downtown Devil article that this summer’s retail outlook in downtown was on par with, if not better than, previous years. “We’ve seen a few more restaurants open up and a couple more coming, and we see hotel occupancy levels climbing in the first six months of the year compared to last year, so that’s good.” Some of the businesses that recently announced their intent to open downtown include GrabbaGreen (CityScape) and Sutra Yoga (2nd St. & Portland). Unfortunately we did lose one, The Local restaurant (3rd St. & Roosevelt) after a six month run.

Last month, the City of Phoenix won a $1.6 million Transportation Investment Generating Economic Recovery federal grant to extend light rail from downtown Phoenix to Baseline Road. Thousands of residents of south Phoenix will reap the benefits of a stronger public transportation system that increases their mobility to other parts of the Valley. This is a big deal and one more important contribution by retiring Representative Ed Pastor.

Co+Hoots, a coworking space in downtown Phoenix, has been ranked #8 on a list of the top 75 coworking spaces in the U.S. Symmetry50, a national bookkeeping service for small businesses, compiles the list. Founder Jenny Poon and Co+Hoots Foundation leader Kristin Romaine serve on the DPI Community Advisory Panel.

On the 25th anniversary of the founding of the Greater Phoenix Economic Council, Barry Broome and Ioanna Morfessis, respectively the current and past CEOs of GPEC, wrote this Arizona Republic op-ed and noted that downtown is all about what metro Phoenix could be: diversity, creativity, education, and entrepreneurship.

DPI, Downtown Phoenix Journal, PCA and the Phoenix Suns invite you to attend our third Radiate PHX business and community networking event on Tuesday, October 21 from 5 to 7 p.m. at the Verve Lounge at US Airways Center. Topics include updates on sports and fitness initiatives such as “FitPHX” and “Meet Me Downtown,” plus a preview of the Suns basketball season. Guest speakers include Councilman Daniel Valenzuela, chair of the Downtown, Aviation, and Redevelopment Committee; Suns President Jason Rowley; and Ralph Marchetta, vice president of ticket operations and general manager of sports and entertainment services for US Airways Center.

The urban bicycle advocacy group, Phoenix Spokes People, has organized a series of events and activities in “Biketober” to promote the cause of cycling in metro Phoenix. Thanks to the Arizona Cardinals, Super Bowl Host Committee, and NFL Foundation, the high school football field at the Arizona State University Preparatory Academy received much needed new sod, paint, and scoreboard. ASU Prep, a K-12 school at 7th St. & Fillmore, sits on the site of Montgomery Stadium. The then, 22,000-seat stadium was the largest in Arizona and one of the largest high school arenas in the country.

Students from Phoenix Union Bioscience High School gathered with members of the downtown Phoenix community on September 27 to build a community learning garden as part of the third annual Green Apple Service Day.

On October 4, an estimated 1,500 Garfield neighborhood residents – young, old, and in-between – participated in one of the city’s largest “Getting Arizonans Involved In Neighborhoods” (GAIN) events. Garfield’s unique social mixer and health fair, GAIN-FIESTA, was sponsored by numerous corporate, nonprofit, and educational groups, and organized by dozens of volunteers.

Goodbye summer heat, hello fall not-as-hot weather. What fall also brings is a jam-packed schedule of arts and culture events and activities throughout downtown Phoenix. October’s First Friday was as popular as ever, as evidenced by the 1,000-plus riders on the Artlink Trolley. Large crowds enjoyed Chaos Theory 15 and new this month was the AZ365 pop-up gallery on Roosevelt Row, sponsored by the Arizona Republic and Artlink. Congratulations to the ASU International Artist Residency Program, located at Combine Studios in downtown Phoenix, for being awarded a $144,000 grant from The Institute of Museum and Library Services to commission three new artists from across the globe to develop art projects that engage the public, such as exhibits, lectures, performances, and publications. Greg Esser, director of the program, is a superstar.

Congratulations also to the Ground Cover Public Art Project, sponsored by the City of Phoenix Office of Arts and Culture and situated on a vacant lot in downtown Phoenix, for receiving a first place award in Arizona Forward’s 34th Annual Environmental Excellence Awards.

Phoenix was one of more than 300 cities chosen to participate in a 10-day global film festival late last month and early this month. The Manhattan Short Film Festival is an annual showing of international, independently produced short films. Ten finalists were selected by an international panel of experts.

Four Chambers Press, the Phoenix-based literary magazine, launched its Fall 2014 issue at a release party on October 2 at FilmBar. To order copies of the first and current issues, click here.

Let’s note the life and passing of Patrick Anthony Lawlor, age 94, the last of the core group to build a place for Arizona’s Irish families to gather, the Irish Cultural Center at Margaret T. Hance Park. According to Mary Moriarty, the Center’s operations manager, Patrick was the patriarch of the local Irish community, having been involved in its formation for 60 years. “Plus he was the gentlest and nicest little man you would ever want to meet.”