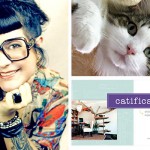 As revered figures amongst the ancient Egyptians, the ultimate accessory for super-villains, and certified megastars of the Internet, cats have long held a place of prestige throughout history.

Today, Kate Benjamin – downtown Phoenix-based cat style expert, blogger and cat lover – is doing her part to keep felines in the catbird seat. She is the creator of Hauspanther, a wellspring of cat-centric products, design inspiration, art, and giveaways for style-conscious cat owners. Benjamin also sells her own line of handcrafted toys and products on the site, along with other stylish and modern cat goods.

She began blogging about cat style in 2007, while still working in marketing and product development for a local start-up that produced modern baby products. “I had seen the trend that parents were looking for cooler, more modern children’s products,” says Benjamin. “I saw lots of blogs about modern parenting stuff, but not about modern cat parenting stuff, so I said, “I can do this.”

Originally called Moderncat.net, she ultimately shifted the name to Hauspanther to make it more distinctive. Hauspanther’s mission is “to spread the word about how good design can enhance the way we live with cats, improving our lives and the lives of our beloved feline companions.”

Eventually, the site grew into a full-time job and Benjamin took the leap into making Hauspanther her main focus.

She attributes her success to timing and being able to fill a hole in the market, as well as to the support of the downtown Phoenix community. “I feel like I know so many of these great business owners and people in the arts in downtown Phoenix. It’s a wonderful support network. I like being a part of Grand and everything downtown.”

When she’s not writing, Benjamin works from her studio in the Bragg’s Pie Factory building on Grand Avenue. There, she and her team design, construct, and test her line of cat products made from locally sourced and often recyclable materials. All the work is done under the watchful eyes of two rescue cats, Claude and Mama, who serve as in-house product testers. Her eleven cats at home also assist with quality control.

As the Hauspanther empire has grown, it has garnered media attention from outlets like the New York Times, “CBS Sunday Morning” and USA Today. It has also attracted legions of fans from around the world, including one especially notable name in the universe of cat worship: Jackson Galaxy. Also known as The Cat Daddy, Galaxy is a famous cat behaviorist and star of his own Animal Planet show called “My Cat From Hell.”

Galaxy contacted Benjamin and the two instantly hit it off. Says Benjamin, “We have the exact same goal. We’re trying to save cats by doing what we do and inspiring other people to take better care of their cats and to make them happy and make you happy.”

It is this shared mission that led to their collaboration on the forth-coming book titled, Catification: Designing a Happy and Stylish Home for Your Cat (and You!).

The book is part cat behavior guide, part illustrated how-to manual for creating “catified” environments in the living spaces shared by cats and their humans. It incorporates Galaxy’s specialization in cat behavior and training, along with Benjamin’s expertise in designing cat-friendly, but stylish interiors within the home.

“It’s like a cookbook with pictures, ideas, tips and tricks, “ says Benjamin. “We want people to be excited and interested and intrigued by watching their cats and seeing what they do.”

Both Kate Benjamin and Jackson Galaxy will be in Phoenix for the official launch of the book on October 14th. They will appear at a Changing Hands bookstore release event that will include a talk and book signing, beginning at 7pm.

Books can be purchased day-of, or pre-ordered by calling Changing Hands in Phoenix at 602.274.0067. For books pre-ordered before October 14th, receipts can be emailed to the publisher and $1 from every pre-sale will be donated to FixNation, an organization that provides free spay/neuter services for community cats and low-cost services for pet cats.