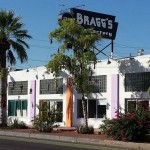 Shimmering mirages still emanate from hot pavement and it will be at least a month until any semblance of cool weather wafts back into the Valley. In the meantime, performing arts seasons are being announced, kids are already back in school, snowbirds in Chicago are buying their plane tickets, and the galleries in downtown Phoenix are gearing up for another season of fantastic exhibitions. Chartreuse, a new gallery on Grand Avenue, will jumpstart the fall season with their inaugural exhibition, “Hot Summer Nights” opening this Friday, September 4.

“Hot Summer Nights” is a collaborative project featuring “images of Phoenix seen through loving eyes” by two local photographers: Jared Elizares and Catherine Slye. The promo copy for this exhibition captures their joy in the project. “As night descends, the city is bathed in rich, saturated, vibrant color. Blues and purples wash the urban environment, juxtaposing the naturally occurring with the human made. What better time to photograph Phoenix in the summer, than at night?”

Elizares’ photos were shot entirely on transparency film with a low rating of ISO 10. Each image required lengthy exposures ranging from eight to 45 minutes. Slye’s images are purely digital, blending the immediacy of digital with the ability to photograph manually. Additionally, Marshall Shore provides accompanying historical context for the photos. Chartreuse is local art advocate Nancy Hill’s new gallery in the old Frontal Lobe space. Hill owns Hazel & Violet, a letterpress print shop housed around the corner, on the southwest end of the Bragg’s Pie C building. Previously she owned and operated 720 Gallery on 4th Street and McKinley in the Roosevelt neighborhood. When those buildings were slated for demolition, she made the transition to Grand Ave, first with her letterpress shop, and now with her newest gallery. For Nancy Hill, it’s a labor of love. “I wouldn’t be choosing to own a gallery if I wanted to be rich,” said Hill. “I’m doing a gallery because I miss having a gallery, and I want to fill that little part of the community.”

“Of course,” she added, laughing knowingly, “I want to sell enough work to cover the rent.”

As in the past, Hill will be working closely with Mike Oleskow to curate the shows. Oleskow has been involved in the arts in downtown for many years and was the previous owner and curator for After Hours Galley. While they intend to focus on showing work by Arizona artists, they will not be strictly limited. “We’ll be focused on showing work we like,” Hill said.

So what’s on tap for the fall for Chartreuse? Cheryle Marine’s work will be featured in October, Shauna Thibault in November, and December will feature a fun show conceived by Kate Benjamin of Hauspanther fame and Mark Allred of Allred Guitars featuring local and national artists. The focus for this holiday show? Why…cats and guitars, of course!

One way to experience what makes Phoenix special is to explore where the arts are thriving: Grand Avenue, Roosevelt Row, the Warehouse District, Garfield, uptown at Central and Camelback, and so many more art spaces and neighborhoods that are blooming in and around our greater downtown. Don’t miss the beauty of this new gallery on Grand, because getting out to see and, when possible, buy the artwork work being created in a city bursting with talent is one sure way to embrace what Phoenix has to offer. When: Friday, September 4, 6:00 pm (Show will be up through the month of September.)