RadiatePhx Poll Results – What Art Category Matters Most to You 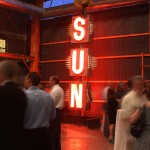 The focus for this month’s gathering was a celebration of both ASU’s new digs in the Warehouse District, and the overall impact of the arts in downtown. As we all know by now, two major sports events, the NFL’s Pro Bowl and Super Bowl, will be coming to the Valley in late January and early February. Our favorite city will be flooded with media from around the country visiting Super Bowl Central right here in downtown.

As a community, we want to share the compelling stories that define our downtown spirit with visitors, whether they be from across the country or across the Valley.

So what exactly are the stories we will be telling?

The City of Phoenix and the Arizona Super Bowl Host Committee are convening committees in preparation for the festivities, and the marketing and media committee is helping identify the many things to do while here in Phoenix.

So, we decided to ask the gathered crowd at RadiatePHX to help identify the art and culture stories that people care about the most. It was a simple, non-scientific poll, but it garnered interesting results.

To simplify the polling, we created six overarching categories: visual art, performing art, literary art, architecture and historic preservation, and public art. In addition, we provided a “write-in” category to  capture anything that didn’t quite fit in the those categories. Everyone who attended received tickets to vote in the category of their choice. Participation was brisk and the results were telling.

Public art, along with architecture and historic preservation, were the two categories that came out on top. Again, it was an entirely unscientific poll, but the “public” nature of both of those choices seems to indicate that people are increasingly aware of the value of public spaces in making our city remarkable. Beautiful public spaces to move through, along with a diverse range artistic and cultural events to choose from are clearly points of pride that we all agree deserve to be shared.

The write-in category received a handful of ideas. Some were related to the arts categories above, some were specific events, and some had a temporary or “pop-up” theme. Most of the write-in suggestions resonated with the overall bent toward activated public spaces.

What do you think of the results? If you weren’t able to attend our September RadiatePHX, what categories would you have chosen?

Comment below and join in the effort to build a list of “must experience” arts places and events that will show the world what matters to those of us who live, work and play in downtown.

And be sure to join us in October, and on the third Tuesday of every month, for RadiatePHX.

In this story: ASU Herberger Institute for Design and the Arts, Downtown Phoenix Inc., RadiatePhx