Food For Thought: A Feast of Words From Eight Authors 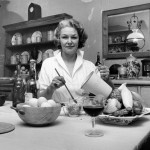 “The writer who never talks about eating, about appetite, hunger, food, about cooks and meals, arouses my suspicion,” writes Aldo Buzzi, “as though some vital element were missing in him.”

This delectable list of literary bites includes authors who would entirely allay Buzzi’s suspicions with their savory descriptions of tastes, textures, and every emotion connected with food. Whet your appetite with Ruth Reichl’s first novel plus fresh new works by Jael McHenry and Michelle Wildgen and venerable classics by M.F.K. Fisher, Elizabeth David, and Buzzi himself. As a voracious reader, I have a tendency to zip through books; Life is Meals: A Food Lover’s Book of Days encourages me to slow down and read just a bit at a time, in tiny, much-anticipated doses. Author James Salter and his wife Kay — herself a journalist and playwright — offer glimpses into their happy marriage with snippets of humor, philosophy, history, reminiscence, scientific fact and verse (like the love poem from husband to wife beginning, “My darling, you will quickly see/This tiny box contains no Brie…”). Winner of a National Magazine Award and numerous James Beard awards, Jeffrey Steingarten serves as longtime food critic at Vogue and as a judge on The Food Network’s The Next Iron Chef. Steingarten’s collection The Man Who Ate Everything won the 1998 Julia Child Book Award as well as honors from the British Guild of Food Writers, and his work has also appeared in The New York Times and Slate Magazine. Named a Chevalier in the Order of Merit by the French Republic, he rewards the reader with twists of dry humor and a willingness to immerse himself in rigorous, painstaking research; delve into his memorable studies of ketchup (whatever your preferred spelling) and sourdough. Steingarten shares writing talents similar to those of the late great Roger Ebert in his deft facility with description and evocative turns of phrase.

British food writer Elizabeth David (1913-1992) piqued the interest of her countrymen in authentic, seasonal Mediterranean and French food with highly regarded cookbooks and articles in Harper’s Bazaar as well as other newspapers and magazines. Her practical yet deeply scholarly anthologies An Omelette and a Glass of Wine and Is There a Nutmeg in the House? blend historical fact with recipes and vigorous, tenacious opinions. David wasn’t shy about voicing judgments on everything from garlic presses (“utterly useless”) to the “idiotic term crispy” to the herb rosemary (“I can’t say I share the taste to any great extent”). David’s contemporary, the iconic Mary Frances Kennedy (M.F.K.) Fisher, became one of the most influential American nonfiction writers, publishing autobiographical essays in The New Yorker and later collections such as Consider the Oyster, How to Cook a Wolf — about living and dining during wartime — The Gastronomical Me, Here Let Us Feast: A Book of Banquets, and With Bold Knife and Fork. Fisher led a long, adventurous life and wrote about every experience, from the perfect salad to mortal illness. Her dependably revealing and cosmopolitan treasuries are particularly appropriate for travel reading.

Aldo Buzzi (pronounced “Bootsie”) was an architect, a filmmaker who worked with the likes of Alberto Lattuada and Federico Fellini, and, late in life, an author. He died in 2009 at the age of 99. The Perfect Egg and Other Secrets (translated from the Italian by Guido Waldman) gathers Buzzi’s reminiscences and recipes alongside drawings by his dear friend Saul Steinberg, the New Yorker illustrator whose style encompassed caricature and cartoon with hints of Picasso.

If you prefer the flavor of fiction, try Jael McHenry’s The Kitchen Daughter. Much like Jonathan Lethem’s Motherless Brooklyn and Mark Haddon’s The Curious Incident of the Dog in the Night-Time, McHenry’s debut novel offers thoughtful insights into the perspectives of those with Asperger’s syndrome. Shy, sheltered, introverted Ginny Selvaggio is a gifted cook who finds herself able to speak with the dead through their recipes (many of which are well worth trying, including the flavorful and comforting ribollita). In her distinctive voice, Ginny provides glimpses into a mysteriously different world of perception as she struggles with her protective, domineering sister.

Dream Lake comes from the Friday Harbor series by Lisa Kleypas, set in the Pacific Northwest. With this novel Kleypas begins to actively explore the supernatural — in the shape of an amnesiac ghost — along with food-focused ambience. Innkeeper and chef Zoe Hoffman creates dishes with near-magical effects: “The kitchen seemed to breathe around them, stirring currents of toasted air that carried the bittersweet zest of lemon rind, the dank sweetness of scrubbed wooden cutting boards, the floating richness of cake, the crisp bite of cinnamon and the black tang of coffee.”

The intricate dance of birth order and relationships in Michelle Wildgen’s gorgeously addictive Bread and Butter made it a perfect choice for our earlier summer reading post on sibling rivalry, but the author’s juicy and creative dishes demand equal attention. Three brothers find their footing from childhood rivalry to adulthood and their management of competing restaurants. Charming, captivating and subtly quirky, Bread and Butter delivers romance and tension with vivid scents and sensations.

And Wildgen writes confidently and convincingly about the backstage world of fine dining and the complex balance between staff and customers — just try to resist her spot-on description of a chef’s pâté-centric reaction to certain clientele: “When a table was being nitpicky or snobbish, he’d roll out a hostile, elegant little still life centered on the unctuous rosy brown velvet square studded with green pistachios and dark garnet pigeon breast, accompanied by hand-ground mustard and silky sheets of pickled turnip. He’d had to stop eventually. Pigeon was a pricey form of psychological warfare, and Shelley complained that cooking pâté made her hair smell of blood.”

For ten years the James Beard Award-winning Ruth Reichl was Editor-in-Chief of Gourmet Magazine, previously serving as restaurant critic for The New York Times and the Los Angeles Times. At last, long after successfully publishing the memoirs Tender at the Bone, Comfort Me With Apples, and Garlic and Sapphires, Reichl tackles fiction with Delicious!, the story of — appropriately enough — a budding food writer. Those who appreciate Reichl’s reviews and essays may enjoy the different nuances of her first-person novel.