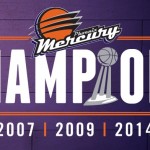 Glory is Ours! The Phoenix Mercury won its third WNBA Championship tonight and fans are invited to celebrate with the team during a fan rally at US Airways Center on Sunday (September 14).

The rally will begin promptly at 2 p.m. on the main court at US Airways Center.

Fans will hear from members of the Mercury team, Phoenix Mayor Greg Stanton and will witness the unveiling of the 2014 WNBA Championship banner. Fans will also be the first to see the team’s championship video.

Free parking is available in the US Airways Center garage from 1-2 p.m. only.  Doors will open for fans beginning at 1 p.m.