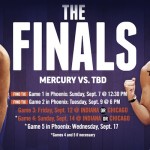 The Mercury—looking for their third WNBA Championship in franchise history and first since 2009—advanced to the WNBA Finals for the fourth time in franchise history and will play either the Indiana Fever or Chicago Sky, whose series will be decided tomorrow night in Indianapolis. The Mercury clinched homecourt advantage throughout the WNBA Playoffs thanks to a WNBA-record 29 regular season wins.

That homecourt advantage is thanks in part to the X-Factor who helped the Mercury to a franchise-best 16-1 (.941) record at US Airways Center this regular season and a current 18-game home winning streak.

In this story: Phoenix Mercury, US Airways Center, WNBA Finals