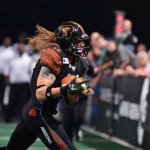 INFO: The parade will begin at 4:00 p.m. on 1st street and Madison, heading west to Central Avenue then turn north. The parade will then head east on Van Buren and turn south on 1st Street and will conclude at US Airways Center pavilion for the ArenaBowl press conference.

Players, coaches and team executives will be available for interviews and photos following the press conference.