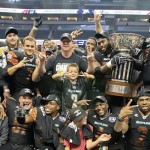 The 2013 ArenaBowl Champions, the Arizona Rattlers have announced they will hold an ArenaBowl XXVI Championship Rally for fans on Sunday, August 25, at 2pm at US Airways Center.

Fans are invited to celebrate the championship with members of the Rattlers team. Players will sign autographs and take photos with fans alongside the Foster Trophy, which will be on display. Head Coach and General Manager Kevin Guy, Majority Owner Ron Shurts, Sidewinders dancers and Stryker D. Rattler will also be on hand for the celebration.

Championship merchandise will be available. Fans can park free of charge in US Airways Center garage.

With the 48-39 victory over the Philadelphia Soul in ArenaBowl XXVI, the Rattlers became just the third team in the history of the Arena Football League to win back-to-back championships and the first to defeat the same team in consecutive seasons.

AND IN CASE YOU MISSED IT, HERE’S THE RECAP OF OUR VICTORY IN ORLANDO.

Orlando, FL – The Arizona Rattlers became the first team since the 1995-96 Tampa Bay Storm to win back-to-back Arena Football League ArenaBowl Championships only team in League history to beat the same team twice in consecutive years as they posted a 48-39 win over the Philadelphia Soul on Saturday afternoon in ArenaBowl XXVI at the Amway Center.

Arizona got on the board first as Nick Davila and Maurice Purify picked up right where they left off in ArenaBowl XXV with an eight-yard touchdown. The Soul quickly answered with a touchdown of their own when Dan Raudabaugh found Ryan McDaniel to tie it at seven a piece. On the rattlers next possession, Davila threw it off the net and right into the arms of Philadelphia DB Rayshaun Kizer. But Rattlers DB Vigil Gray did what he’s done all year and snagged the pick in the end zone.