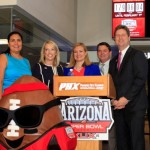 With 179 days and counting until Super Bowl XLIX, the Arizona Super Bowl Host Committee and Phoenix Mayor Greg Stanton unveiled a countdown clock at Phoenix Sky Harbor International Airport which will mark the days, hours and minutes until the opening kick-off of the State’s third Super Bowl since 1996. “We’re thrilled to have the Super Bowl XLIX countdown clock prominently located at Sky Harbor, the most highly-trafficked point of entry to the state. As we hit the six-month mark, this will help drive awareness and anticipation for the Super Bowl and all the surrounding events,” said David Rousseau, Chairman of the Board of the Arizona Super Bowl Host Committee.

“The city of Phoenix is ready to host its largest Super Bowl celebration yet,” said Phoenix Mayor Greg Stanton. “Phoenix Sky Harbor will be the gateway to the Valley for tens of thousands of Super Bowl visitors and we are working closely with the Arizona Super Bowl Host Committee to ensure the best fan experience the NFL has ever seen.”

In the month surrounding the big game, Phoenix Sky Harbor will serve an estimated 4 million passengers. The new PHX Sky Train will provide a quick, convenient ride from the airport to the light rail connection, giving football fans an easy way to travel to Super Bowl Central, a festival made up of 12 city blocks that will be the epicenter of free, fan fun, in Downtown Phoenix. Super Bowl Central will be held for four days leading up to the game.