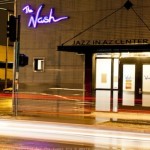 Open for just over two years, The Nash has already been called a “great jazz room” by none other than DownBeat magazine, although for many Arizonans it remains an undiscovered gem on Roosevelt Row.

The education and performance venue, named after Phoenix-born jazz drummer Lewis Nash, is owned and operated by the non-profit Jazz in Arizona, familiarly known as Jazz in AZ. Board vice president Jeff Libman became involved with the organization as soon as he learned about plans for The Nash.

“The places I lived before are Chicago and New York City and then here,” says Libman, “and this place needed a jazz club — and bad.” He points out the wide range of musical experiences available at The Nash. “If this is going to be the one jazz club in Phoenix, we want everybody to have something they can appreciate here.” Libman adds, “And then, of course, we want to reach the people who said, ‘Hey, I had no idea that I like jazz…but I like this, and I discovered it here.’”

The Nash offers concerts through the summer on Friday and Saturday nights on the Contemporary and Mainstream Jazz series, as well as the occasional special event. Says Libman, “We wanted to say, ‘we’re open to different interpretations of jazz,’ because this ‘what is jazz?’ conversation is still going on in very interesting ways.” He continues, “There does need to be some kind of boundary…we have a mission. This was supposed to be a jazz oasis in the desert…so one of the questions I ask about something that’s on the border is ‘Is this jazz-inspired? Does it have improvisation? Does it have swing? Are some of the musicians…jazz musicians who sometimes do other things, and this is their different side project?’” Libman smiles. “I think we get into trouble as an organization if we get too snooty or too particular about what [jazz] is.”

At Arizona State University Libman teaches jazz guitar and Jazz Lab, directs the Jazz Repertory Band, and coaches combos. He’ll complete his PhD this fall while maintaining an active performance schedule, playing on his own and in a contemporary jazz group called Running From Bears and regularly hosting jam sessions at The Nash.

The venue includes three back rooms for break-out sessions and workshops, as well as a recording booth. A tiny lobby leads into the open seating and stage area, where a curtain serves as the simple backdrop. The Nash’s gallery-lit walls carry themed art installations rotating every few months, and the sounds of downtown are faintly audible. The gallery at The Nash (photo by K. Becker)

In its default table-seating configuration, The Nash holds 75, although without tables it can hold an audience of 120, allowing some groups to play without amplification. “If your jazz club gets too big it starts to feel like a concert hall; it’s not as intimate any more. So there’s a sweet spot of size,” says Libman. Without an elevated stage, the piano can be easily moved and the audience enjoys close proximity to the performers. “One of the reasons is sometimes we have a big band in here,” Libman adds, “and sometimes we have a big big band in here, and there’s somebody in the audience sitting here” — he pulls forward a chair in the front row– “and there’s a baritone sax player sitting here” — he gestures a few feet away. “So this allows us the flexibility.”

“If you want this visceral thing about being there and feeling connected with it more than perfect sight-lines, then this is the kind of room for you,” says Libman. “And I like that. There are trade-offs with everything.”

The Nash offers year-round private and group lessons, jam sessions every Saturday, and a wealth of affordable educational opportunities including workshops for all skill levels and instruments. Recent multi-week workshops featured “Singing Standards” — learning repertoire from the Great American Songbook — and “Playing on Changes,” a four-week introduction to improvising over chord changes.

Saxophonist Adam Roberts teaches “Electronics for Horn Players” on August 2 and the notation software workshop “Finale for Jazz Musicians” on August 9. Not every participant needs to be a performer; Libman himself led an “exposure” session on music history, appreciation, and listening. The Nash’s 200 performances each year include the Catch a Rising Star series, which presents talented young artists and sometimes helps launch careers. First Fridays mean special free shows. “To be on the street is very powerful,” says Libman, “because this is a burgeoning arts district — we have 1500 people come in and out of the door on a First Friday.”

Libman particularly appreciates The Nash’s attraction for young listeners. “[It’s] one of the few places that I can think of where people who are under 21 years old are like, ‘We’re gonna go to jazz shows regularly.’”

The venue often welcomes all ages, but also holds a BYOB certificate, which allows patrons to bring a limited amount of alcohol for a small corkage fee, an arrangement which may change next year. “But we won’t do anything that makes it so you can’t be under 21 and come here on a regular bases,” Libman assures me. “There are some compromises we’re unwilling to make.”

“We feel like this whole artistic energy in Phoenix is starting to coalesce and grow,” he says, “and we just want to get in and be a part of that.”