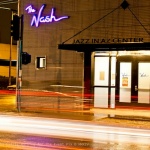 October is a month-long celebration of the 5th Anniversary of The Nash! Within 5 years of its opening, The Nash has welcomed some of the biggest names in jazz, has been named as a national “jazz hub,” has served as a home for hundreds of young, new jazz musicians and is a vibrant part of Phoenix’s bustling economic development downtown. Celebrating these 5 years, The Nash namesake Lewis Nash will host a jam-packed weekend for the anniversary, with major events planned throughout the month of October. Photo Courtesy of The Nash.

Also in the month of October at The Nash: Emmet Cohen, Banda Magda, Francine Reed, Dmitri Matheny and many more great artists! (see calendar for all shows)

The Nash is located at 110 Roosevelt, Phoenix AZ 85004 on Roosevelt Row in downtown Phoenix. More information is available at www.thenash.org or by calling 602-795-0464.