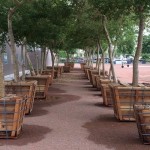 A unique public/private partnership is saving dozens of mature trees and bringing additional shade and beauty to the increasingly walkable Downtown core.

When a City of Phoenix-owned lot on Second Street between Taylor and Polk was tabbed as the future site of Arizona State University’s new law school, a place-holding parking lot was created. When the timetable for construction of the law school was accelerated, it left the future of the lot’s 116 trees in doubt.

The Downtown Phoenix Partnership is collaborating with ASU, DPR Construction and the City of Phoenix to save many of the trees and transition them to new homes in the Downtown core.

DPP recently boxed 43 trees that are being stored at the Partnership’s new activation project, the SPACE_BETWEEN, until weather permits more favorable planting conditions. DPR is salvaging 32 Palo Verde and Mulga trees along Taylor and Polk streets that will remain in place as part of the finished law school project.

Many of these displaced mature trees, which would cost between $1000 and $2000 to buy new, will be transported this fall to vacant Downtown tree wells along Adams Street between Second Street and Second Avenue. Others will stay at the SPACE_BETWEEN, which has seen its site plan break ground and will debut this fall on First Street between Valley Youth Theatre and Taylor Place.

“This is a great opportunity for us to put more established trees within our tree wells to provide more shade canopy, which we desperately need Downtown,” said Ray Cabrera, the Partnership’s Streetscape Programs Manager. “These trees have had three years to grow and provide shade to those who walk near the lot. It’s only appropriate we try to transplant as many of these valuable public assets as we can.”

Additionally, the Partnership will be switching out many Palo Brea trees along Adams Street. Palo Brea trees have been phased out of that street’s tree palette because they don’t do well in the tree wells and their branches have the propensity to break, often causing property damage. Trees will also be planted in abandoned tree wells near the former Matador building.

This project has also spawned the Downtown Tree and Shade Task force. Led by the Partnership and Downtown Phoenix, Inc., the task force will focus on education, advocacy and demonstration projects that will help Downtown become the model for how the City and region’s tree and shade goals are met and exceeded.