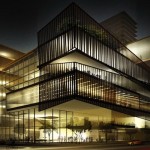 The Phoenix City Council last week approved city staff to begin negotiations and enter into contracts to facilitate Arizona State University’s development of the Arizona Center for Law and Society on city-controlled property in downtown Phoenix.

ASU proposes to develop the Arizona Center for Law and Society on approximately three-quarters of a block of city property bounded by Polk, Taylor, First and Second streets. “Thank you to ASU, President Crow, my fellow council members and the Arizona Board of Regents for working so diligently in making this innovative move to our growing downtown Phoenix urban core,” said Mayor Greg Stanton. “This is more than just a move – it’s a major part of our city’s and region’s future and a place where ideas from some of the best law students in the country will contribute to our justice system and make Phoenix and Arizona a better place to live for generations to come.”

In addition to the hundreds of ongoing professional jobs created in Phoenix by this investment, approximately 1,000 construction-related jobs and $1 million in construction sales tax will be generated.

“Locating the College of Law in downtown Phoenix is a perfect match that will enhance the vibrant university campuses, create jobs and provide real-world educational benefits and opportunities for the law students,” said Vice Mayor Michael Johnson, chairman of the City Council’s Downtown, Aviation, Economy and Education Subcommittee.

The approximately $100 to $120 million, six-story facility will include the Sandra Day O’Connor College of Law in approximately 250,000 to 300,000 square feet, as well as continuing legal education facilities, community legal services, public retail amenities and approximately 200 to 250 parking spaces.

“This is an investment that makes sense for ASU College of Law, its students and the city of Phoenix,” said Councilman Bill Gates.  “The move will position one of our nation’s top public law schools within walking distance of local, state and federal courts, our state’s top law firms and business headquarters.”

“We are deeply grateful for the support we have received from Mayor Stanton and members of the City Council for our relocation to downtown Phoenix,” said Douglas Sylvester, dean of the Sandra Day O’Connor College of Law.  “We are excited about the opportunity to be situated in what has become the legal, government and corporate center of not only Phoenix, but of Arizona as a whole, and for the opportunity to further embed ourselves in the downtown community.”

In this story: Arizona Center for Law and Society, ASU Campus, city of phoenix, Downtown Phoenix