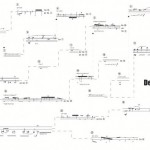 It’s hard to imagine how exciting it must have been to attend the 1913 premiere of Igor Stravinsky’s The Rite of Spring, which ended in a riot because of the disturbing rhythms and incendiary musical patterns. Even Beethoven – now considered a staid staple of classical music – was once regarded as somewhat revolutionary in his harmonies. A concert titled Opus II features premiere performances of works by members of the Arizona State University Society of Composers, Inc. (SCI) in the informal, inviting setting of Phoenix Art Museum, offering the chance to perhaps hear from a modern-day Stravinsky or Beethoven. A page of the score for C. Sipho Mabingani’s “First World” (courtesy of the composer)

“The partnership with the museum is great,” says SCI president Collette Sipho Mabingani, “because…we have the same mission: exposing the public to this music that sometimes is not accessible.” Mabingani was born and raised in South Africa and obtained degrees at Grand Valley State University and Central Michigan University before earning his doctorate in music composition at ASU.

“I started with [percussion] performance,” he says, “and…you have to improvise, so you get this idea of creating…and I got tired of playing other people’s music. I love experimenting with new kinds of music, so I still try and discover something I’ve never heard before.” At Opus II Mabingani will perform his own composition, a solo autobiographical work using rhythms reflecting his personal journey from South Africa to the West, including Latin cadences.

Other composers will use various configurations of a “Pierrot ensemble” of flute, clarinet, violin, cello, percussion, and piano — named after the instrumentation used by Arnold Schoenberg in his landmark 1912 melodrama Pierrot Lunaire (Moonstruck Pierrot) –- plus saxophone.

“Even though it’s been around for over a hundred years,” says SCI public relations manager Elliot Sneider of the ensemble, “there’s something always new about it, for some reason. There’s a lot you can do with it, so it’s kind of fun to work with.” Shortly after Sneider wrote his dissertation analyzing blues in the music of Aaron Copland, Maurice Ravel, and George Gershwin, he composed Big Hands Blues for piano, then arranged it for Opus II.

“I…was drawn to jazz when I was very young,” he says, “…this pull to jazz composers like Charles Mingus and Thelonious Monk, and the idea of having these structures that…allow for improvisation.”

Sneider studied composition at New England Conservatory of Music and New York University, then received his DMA from ASU, where he was initially intrigued by the work of professor James DeMars. “I have a jazz background,” says Sneider, “so for me there’s always been a pull to accept other cultural music and ‘how do I bring things together?’” He continues, “I found he’s someone who has…made a career dealing with those issues, and so that’s why I wanted to study here.”

“He [DeMars] composes in the same way that I do, which is what we call ‘intercultural music’,” says Mabingani, who also found his advisor’s compositions appealing. “But he uses Native American music with Western music, combines it and makes it his own…so I just fell in love with the way he writes.” “I think all of the composers at the school really have something unique to bring,” adds Sneider. “Usually you choose your composer and you work only with that person, but here [at ASU] they not only encourage but require you to…work with all of them for a much broader experience.”

“There’s no one dogma, or one style,” says Israeli composer and Doctor of Musical Arts student Gil Dori. “I really got into the music of [ASU professor] Glenn Hackbarth — he’s…into the music on the electronics side, and that’s what I’m interested in doing too.” Dori came to ASU for his master’s degree after graduating from Haifa University, which he describes as “really heavy on composition…the best composers in Israel.”

For Opus II, Dori wrote a work called Shevarim; “in Hebrew it means ‘fragments’ or ‘shards,’ he explains, “but it’s also one of the calls of the shofar [ram’s horn], and really that’s a work based on an old Eastern European Jewish folk tune…it just slowly emerges through this texture.” The piece is a duet for saxophone and bass clarinet, and Dori enjoyed integrating sound effects like tongue smacks, clicks, and breathing through the instruments.

Visit the Phoenix Art Museum this afternoon to hear these new works by Mabingani, Sneider, Dori, and other ASU composers — it’s free with museum admission, and the program promises previously unexplored treasures.