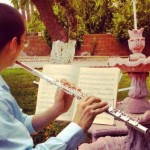 At 21, Salazar is a success story from Rosie’s House, the downtown Phoenix-based non-profit providing lessons and instruments for young musicians. “I started to play [the flute] in fifth grade when I was at Valley View Elementary School,” says Salazar. “In eighth grade…my band director, Mr. [Edward] Gaona, told me about Rosie’s House and said, ‘…The next step to being a musician is to take private lessons.'”

Thanks to a recommendation from Phoenix Symphony flutist Joe Corral, Salazar was able to begin lessons with longtime Rosie’s House teacher Judy Conrad. “My first lesson was so packed and filled with things I didn’t even know,” exclaims Salazar, “…so much…and she told me about long tones and I started to do them and my sound just bloomed.” He smiles and continues, “It’s been amazing — Judy is like a grandma to me. She’s taught me so much…I owe most of it to her.” Salazar went on to win a spot on the National Public Radio show From the Top, garnering a Jack Kent Cooke Young Artist Award and performing on several broadcasts. From that experience he was inspired to coach weekly sectionals and give private lessons to students at Valley View, his alma mater.

Now Salazar studies with Elizabeth Buck at Arizona State University’s School of Music, although he’s also worked with another Phoenix Symphony flutist, Brian Gordon. “He just gave me free private lessons out of the kindness of his heart,” says Salazar of Gordon. “He was very generous to me…and I still go to study with him every now and then.”

Salazar has a tangible affinity for his instrument. “I thought [of] the flute as being of a very pure sound, with a pure tone,” he explains, “and I wanted to be the one making that sound.” Today he performs on a high-quality Altus flute given to him by Arizona Musicfest during his freshman year of high school. “The flute really sings,” says Salazar. Salazar at Valley View Elementary School (courtesy “From the Top”)

His other patrons include Nina Mason Pulliam Charitable Trust president and CEO Harriet Ivey, who matches funds earned by Salazar through his fundraising efforts and his part-time job at Target. Another source of encouragement is businessman James Hagger, who lives in the Phoenix retirement community where Salazar’s mother works as a caregiver. “He’s one of my big supporters as well,” says the flutist, “both financially and emotionally. Salazar’s father is a server assistant at Aunt Chilada’s, a restaurant at the Arizona Grand Resort, and neither he nor Chaz’s mother are musical. “Even though my dad knew nothing about this kind of music,” adds Salazar, “…he heard me play and that’s when it sold him.”

Salazar began performing benefit recitals as a high school sophomore, raising money to pay for school while gaining experience onstage and expanding his repertoire.  “My idea is to get a good, small audience and really to move them,” he says, and that’s just what happened at his June recital with pianist Snezana Krstic, which was one of the best of the season.

The program opened with Philippe Gaubert’s rich but playful Fantasie, and continued with a brilliant, wide-ranging new sonata by ASU graduate Eric Hessel. “I gave the world premiere of the piece…and loved it so much that I programmed it on my recital,” declares Salazar.

He continued with the unaccompanied Syrinx by Claude Debussy, a haunting, unforgettable work, and ended with the vigorous Fantasie on themes from Der Freischutz by Paul Taffanel. “The piece is based on Weber’s opera by the same name, which loosely translates to The Free Shooter,” says Salazar. “There are very fast variations in the middle section that are quite virtuosic…it’s definitely a barn-burner.”

Keep an eye out for Salazar’s future performances — he’s an active member of Buck’s flute studio at ASU, and he occasionally offers free community recitals that you won’t want to miss as you follow his progress through the world of professional classical music.