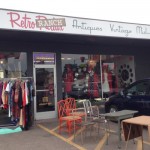 While Melrose District staple Retro Ranch has fans that spread well beyond the downtown community, locals and tourists alike had to visit the store in person to see the ever-changing goods on hand. But now, despite its vintage status, Retro Ranch has launched a seemingly anachronistic online presence to make a name for itself in 2014. At the beginning of the year, the store launched an Instagram account to attract the social-media savvy crowd with curated visuals. The store has also recently launched an Etsy shop, bringing online shopping to those who are searching near and far for the best from Phoenix’s past.

Formerly called Retro Redux, Indigo Hunter acquired the store in 2009 when the previous owner retired. In addition to a slight name change, a few other updates have slowly made their way through the densely-packed aisles.

Michelle Eichenberger, a member of the Retro Ranch team, has helped bring a modern perspective to the vintage market.

“There’s no way to keep up with a business anymore if you don’t [use social media],” Eichenberger said. “That’s what makes it hard for the smaller, even more old-school places like us.” Until recently the store did not even have a computer, so they are learning to manage old and new technologies. Caty Rushing, another team member, said they complete all business transactions by hand to stay true to the store’s vintage flair.

“It’s very bare bones, but it really works for us,” Rushing said. “And that’s why I think branching into the social media thing was kind of a big deal because it’s really heading into the more technical direction.”

One of the reasons they started posting merchandise on Instagram was of the app’s straightforward approach to displaying merchandise, thus making it more accessible for customers. Many have already purchased items they saw on the account.

“That’s the whole point of stores putting their merchandise on that [social media]. As soon as you see it, you want to go and buy it,” Eichenberger said.

The variety of Retro Ranch gives the store another advantage over other stores that sell vintage or antiques, but the obstacle is finding a way to effectively communicate what it offers.

“We’re an antique store, but we’re kind of focused on antiques that younger people are interested in,” Hunter said. “We don’t work with a lot of the much older pieces. Reaching those [younger] people are online a lot.” In merging the old and the new, Retro Ranch has partnered with local record store Stinkweeds, which provides a listening station at the front of the store where customers can listen and purchase music handpicked by the Stinkweeds staff.

Dario Miranda, a sales associate at Stinkweeds, said there needs to be a balance between traditional and modern selling practices.

“There’s a trick to it with the social media,” Miranda said. “You could be a robot online or show that your establishment has a personality, and that’s what you’re trying to sell.”

While it can be easy to lose the vintage essence in modern platforms, staff members from both Retro Ranch and Stinkweeds said they maintain the retro vibe of the store through the language and presentation.

Despite the continuously changing business model, the Retro Ranch team strives to leave customers with a taste of the past whether it is in the store or online.

“The challenge isn’t getting people in the door, it’s keeping up with technology,” Hunter said. “We want to make it more known.”