Wire | So You Think You Can Dance? 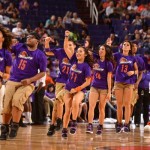 The Phoenix Mercury are looking for highly-energetic performers to audition for the 2014 Mercury Hip Hop Squad on Wednesday, April 9 on the Annexus Practice Court at US Airways Center. Registration begins at 6 p.m. with auditions starting at 6:30 p.m. Those interested in auditioning must be at least 18 years of age by April 9.  Members of the Hip Hop Squad are expected to perform at all Mercury home games, interact with fans and appear at community events throughout the 2014 season.

On the day of auditions, performers can park for free in the US Airways Center parking garage, located on the west side of the arena (on 1st Street just south of Jefferson). There is no fee to audition.

Finalists from round one of auditions will be asked to return for the final audition on Saturday, April 12 at Tempe Marketplace. The final audition will begin at 10 a.m. on the main stage near Dave and Busters, and is open to the public for viewing.

The Phoenix Mercury, presented by Casino Arizona and Talking Stick Resort, will open the 2014 WNBA season onSaturday, May 17, when they host the Seattle Storm at US Airways Center.  And, don’t forget, this summer the Mercury and US Airways Center host Boost Mobile WNBA All-Star 2014 onJuly 19. Season tickets, ticket packs, All-Star ticket packs, and single-game tickets are available now on PhoenixMercury.com.