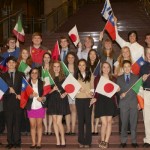 Phoenix Sister Cities, Inc., a nonprofit organization dedicated to creating and enhancing global connections, and Phoenix Mayor Greg Stanton will host the first-ever Mayor’s International Gala on Thursday, April 3, at the Sheraton Phoenix Downtown Hotel, 340 N. Third St. The reception is from 6 to 7 p.m. and dinner from 7 to 9 p.m. Sponsored by Arizona State University, the event will celebrate the city’s cultural diversity and support Phoenix Sister Cities programs. The evening will feature international cuisine, live entertainment and a silent auction. Stanton also will present the first City of Phoenix Global Citizens Award to a resident for his or her outstanding contributions to international relations.

Proceeds from the event will benefit Phoenix Sister Cities’ programs, which include international business relations and youth exchanges with the city’s 10 sister cities.

“It opens the doors for international access, opportunities, and resources for both local businesses and our residents. This event celebrates our diversity and helps ensure that Phoenix Sister Cities can continue to bring our city a rich variety of cultural, economic and educational programs in the future.” “As with many of the cultural programs we sponsor, this evening will be an opportunity to make personal connections and discover the resources that Phoenix Sister Cities has to offer.”

Business or traditional international attire suggested. Tickets are $100 each and are available via the Phoenix Sister Cities, Inc. website at phoenixsistercities.org or by calling 602-534-3751.