A Conversation with Don Brandt 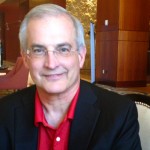 “We’ve had some opportunities come along and we’ve capitalized on them.”

Donald Brandt is Chairman of the Board, President and Chief Executive Officer of Pinnacle West and Arizona Public Service (APS), one of the largest employers in the state and the largest in downtown Phoenix. APS has about 1800 employees in their downtown office on 5th Street, and another 200 or so just south of downtown.  Brandt moved from his hometown of St. Louis to Phoenix in 2002.  He got involved in downtown in 2007, when  Jack Davis, (also of APS), invited him to join the Downtown Phoenix Partnership board. Last October, Brandt then transitioned to Board Chair for the new umbrella organization, Downtown Phoenix, Inc. We asked him to describe his first impressions of downtown in 2002 and how much has changed since the mid-2000’s. “I didn’t even know there was much of a downtown. I walked around and kind of expected to see a tumbleweed. So much has been developed in the last ten years….You look around and it’s a dramatically different city. I don’t think anyone’s going to expect to see a tumbleweed down here today.”

“So much has been developed in the last ten years….You look around and it’s a dramatically different city. I don’t think anyone’s going to expect to see a tumbleweed down here today.”

How did this change come about? “The business community, the Phoenix city government and other agencies have always had a good working relationship” said Brandt. “We’ve had some opportunities come along and we’ve capitalized on them.”  From his perspective, the history of good relationships among these entities has been key. “The ASU campus downtown, no one dreamed of that 10 years ago; the restaurants, the Science Center, the light rail,” he continued. “I think it was a lot of coordination with the city, which had been a great partner all along…cooperation and coordination are important, and capitalizing on opportunities.”

Brandt was part of a team of people including Mayor Greg Stanton, Mike Ebert of RED Development, David Krietor and others, who spent the better part of a year visiting other cities to see what kind of structures they had; to understand what worked and what didn’t; and what was possible in Phoenix and what wasn’t. The cities explored included Brandt’s hometown of St. Louis, Denver and Seattle. Out of this research, “we saw an opportunity (with the creation of Downtown Phoenix Inc.), to acknowledge a broader sense of downtown and bring things together under one umbrella to coordinate and deliver a message,” said Brandt.

Brandt believes that the Downtown Phoenix, Inc. structure will expand relationships among business, government, education entities, community groups, and residents. One of the biggest benefits of this structure is that “DPI will coordinate different entities downtown…political leaders, business leaders and community leaders – just a year into it we’re beginning to speak with one voice. We set the priorities and tackle them, and, frankly, are able to bring more resources to bring to bear.”

He points out that the broadened membership component of DPI is a key part of getting everyone’s voice at the table. “PCA (Phoenix Community Alliance) was mostly the businesses and developer community. In cities that are successful with this umbrella structure, such as Denver, St. Louis, Seattle, the residents and small businesses also have membership for a modest fee and get value from it.” As an affiliate and the membership arm of Downtown Phoenix, Inc., PCA will provide that value.

“…we saw an opportunity (with the creation of Downtown Phoenix Inc.), to acknowledge a broader sense of downtown and bring things together under one umbrella to coordinate and deliver a message.”

Another thrust for DPI will be supporting and coordinating events. Brandt mentioned the success that Denver has had with their events. “Denver’s got more than 10 years on us, but we’re starting. They have one event after another and generate a net profit of about $10 million from their events. We have a few events in downtown now, but hey,” he smiles, “we have a few more months of good outdoor weather than Denver.”

So how do he and his family like to spend their free time downtown? “We come down for all kinds of sports and to eat. There’s plenty of variety down here, even just here in Arizona Center, for example. Particularly after work, we meet friends for dinner and a drink and walk over to a ball game.”

Additionally, APS often has visitors and guests from out of town and Brandt is clearly proud of what downtown has to offer visitors, including great hotels and the world-class Phoenix Convention Center.

We finished by asking Brandt his thoughts looking forward to the Super Bowl activities that will be in downtown next year. “Their (the NFL) downtown presence is going to be huge. There’s plenty of opportunity for businesses downtown to participate and support that.” He went on, “It will be a blast down here. In New York last year, 70-80,000 people went to the game, plus probably 300,000 others came in for the experience. In New York, you didn’t notice 400,000 extra people,” he laughed, “but I think we’ll feel it in downtown Phoenix.”