There is life after the Super Bowl. Outside it’s sunny and bright. It’s a good time to be in downtown Phoenix. And below is a recap of the major downtown news, events, and activities since the thousands upon thousands of New England Patriot and Seattle Seahawk fans left town. (But if you do have the urge to re-live all things Super Bowl, feel free to visit Downtown Phoenix Journal’s Super City webpage.) 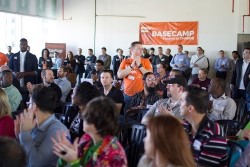 High Tide at downtown’s Luhrs City Center now offers business startups a chance to receive $50,000 in funding with no exchange for equity. The national startup commercialization program, which enables entrepreneurs to build their products and take them to market faster, is part of a new technology and innovation hub created by business accelerator Tallwave and developer Hansji Corp. For more information and to apply, click here.

Thanks to a $175,000 grant from Chase Bank, the ASU Women’s Entrepreneurship Initiative will accomplish even more to support and advance women-led businesses.

The third annual Phoenix Women Investing in Women Summit, held at the ASU downtown campus this month, focused on providing financial and other business information to female entrepreneurs, business professionals, and students.

Also this month, the CO+HOOTS Foundation organized the largest 24-hour Code Day event in the U.S. with more than 120 middle and high school students.

The annual Catalyst Conference, hosted by Girls in Tech, will be held in downtown Phoenix (April 26-28). Stated Mayor Greg Stanton, “We’re more than excited to host this premiere tech conference in Downtown. Women at the forefront of the technology and start-up industry will have an opportunity to experience first-hand Phoenix’s rapidly growing entrepreneurial ecosystem and innovative community.” A plan to transform one of downtown’s biggest vacant lots into a large residential development continues to move through the City Hall approval process. Downtown Phoenix Inc. and the Downtown Phoenix CDC are coordinating efforts to create initial design ideas and solicit community feedback into the proposed 7.4 acre project south of Fillmore Street between Fourth and Sixth avenues. The next step is the approval of a Request for Proposals by the Phoenix City Council.

Downtown Phoenix has become an increasingly desired residential market and much of the current development activity has focused on the Roosevelt Row community. There appears to be be a consensus that higher residential density and having more people living downtown is a good thing, but not at the risk of jeopardizing the unique character of this important part of downtown. Meeting both of these objectives will require better dialogue between community and development interests and some compromises. The preservation of the DeSoto Building at Central & Roosevelt and the Union@Roosevelt residential project are positive examples of what could be.

The city of Phoenix has launched a pay-by-phone parking app for downtown Phoenix and hopes to create an online database of parking spaces, garages, and lots for future planning Two groups released a study Feb. 4 ranking Phoenix in the middle of the pack among large cities in an Innovative Transportation Index of technology-enabled options. The U.S. PIRG Education Fund and the Frontier Group noted that ride-sourcing, bike-sharing, car sharing, apps for public transit, and more make it easier for residents to get by without cars. Austin, Texas; San Francisco; and Washington, D.C., held the top three spots among the 70 cities studied, while Phoenix ranked 32nd. Artlink’s 27th annual Art Detour (March 7-8) will paint a roadmap for the public to meet the artists and discover the myriad art spaces that fill downtown Phoenix. Activities include a free circulating trolley that gets you where the action is, bike and walking tours, exhibits, hands-on kids’ activities, food trucks, and much more. Kicking off this year’s Art Detour festivities was the Feb. 21 Art d’Core Gala at the Crescent Ballroom that featured a “Celebrate Downtown” address from Mayor Greg Stanton; three art pieces created by Arizona artists inspired by neighborhoods along the Metro light-rail route; and a Phoenix Theatre song-and-dance performance providing a virtual tour of downtown Phoenix.

Cyphers: The Center for Urban Arts opened three years ago in north Phoenix but is now located at the Phoenix Center for the Arts at Third and Moreland streets. Every Monday night the organization holds five classes where graffiti art, hip-hop dance, and mixing vinyl records are taught to the 30+ students, some as young as five-years-old.

A state Senate committee has passed a bill to reopen the Mining and Mineral Museum that closed in 2011. The proposal would transfer the stewardship of the museum from the Arizona Historical Society to the Arizona Geological Survey and allocate more than $428,000 for operation and maintenance costs in the budget year beginning July 1.

According to Channel 12 reporter Brandon Hamilton, Meet Me Downtown can best be described as a family that you don’t know until you come to downtown Phoenix. It’s a place you can walk, a place you can run, it’s a place for community, it’s a place to help local businesses. Every Monday night, starting at 5:15 p.m. at the Corner Restaurant at CityScape, people gather to get fit together while passing by sites around downtown, Roosevelt Row, Hance Park, and back.

There are two new fitness-related businesses in downtown Phoenix. Orangetheory Fitness will be moving into CityScape (next to the CVS) and EOS Fitness has replaced Gold’s Gym, also in CityScape. Orangetheory has been rapidly expanding across the Valley over the past few years, with more than a dozen clubs operating. Two private equity firms, Bruckmann, Rosser, Sherrill & Co. and Performance Equity Management, purchased 16 Gold’s Gym locations in Phoenix, Las Vegas, and Southern California. Six locations in Phoenix changed to EOS.

Since 2006, the Phoenix Suns and Arizona Public Service (APS) have teamed up to renovate 11 basketball courts throughout Arizona via an initiative called The Rebound Project. Their most recent renovation: a court at the Osborn Complex near 17th and Adams streets near the Suns’ arena in downtown Phoenix. Nearly 700 children live at or near the low-income complex.

ASU’s College of Public Programs has changed its name to the College of Public Service and Community Solutions, a name that college officials said more clearly defines what the college does. Dean Jonathan Koppell said the main catalyst for the name change was the ambiguity of the former name and a need to better capture the work of the college’s students and faculty.

Chris Camacho has become the fourth CEO and president of Greater Phoenix Economic Council. He has been serving as interim president since Barry Broome stepped aside to take a similar role with the Greater Sacramento Area Economic Council in California. Best of luck and success to both Chris and Barry in their new roles.

At last Thursday’s Tourism Unity Dinner staged by the Arizona Tourism and Lodging Association, Visit Phoenix CEO and DPI board member Steve Moore was given the Legacy Award in recognition of his long-standing record of substantial contributions to the travel and tourism industry. Many of downtown’s big wins, including this year’s Super Bowl, next year’s college football national championship and the 2017 Final Four, can be traced back to Steve and his Visit Phoenix team and I hope you’ll join me in congratulating him on this richly deserved honor.

In 1947, in a tiny downtown storefront where Patriots Park once stood, the Phoenix Indian Center opened to offer a safe place for Native Americans, away from their tribal lands, to find housing, jobs, and other basic necessities of life. It was the first such non-profit center in the United States. Leon Grant, one of its founders, passed away last month at the age of 90, and we note his tireless dedication and hard work to make Phoenix a welcoming place.