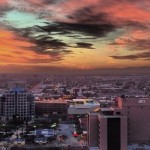 Earlier this week, the Phoenix Convention Center hosted Imaging USA 2014, the largest annual convention and expo organized by and for professional photographers. More than 8,000 photographers attended, snapping shots of downtown Phoenix as they honed their newly developed skills acquired from the over 100 speeches, presentations and hands-on demonstrations at the fair. Of the successful event and setting, John Owens, of the Professional Photographers of America, says, “Phoenix has been a tremendous host for Imaging USA 2014. The warm sun, friendly locals and the downtown area in particular has helped enhance the experience for attendees by being so welcoming. And of course, the valley provided a beautiful backdrop for thousands of photographers to immediately practice what they learn.”

DPJ followed those attending IUSA14 and posting pictures on Twitter and Instagram, culling the most representative shots of the downtown scene, and asking our readers to vote for their favorite photos. Below are those that received the most “likes” on Instagram. See more on DPJ’s Facebook page.