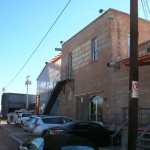 As part of the Herberger Institute for Design and the Arts on ASU’s Tempe campus, the School has found its development somewhat hindered by geographic constraints. “The School of Art is actually in 13 different buildings,” says Adriene Jenik, professor and director of the School. Student and faculty facilities have historically been scattered haphazardly, sometimes occupying leased off-campus venues.

“We have a space…called the Community Services Building, and it’s on Curry and Mill,” describes Jenik. “It’s an old children’s hospital, so we have two wings and the upstairs…they used to be patient rooms.” She continues, “We also have studios in…University Commons…between 7th and 6th [streets], kind of just tucked north of campus. And then we have other students…in what we call our Cornerstone Building, which is at the northeast corner of Rural and University, tucked back behind the comedy club. They’ve been all over the place.” Jenik adds with a rueful smile, “A lot of the spaces are actually not proper studios at all — they’re just sort of a closet…areas that people took over. All these different crazy places…you know, you make do. I mean, artists — we’re good like that.”

“But…everybody knows that every artist needs a studio space of some kind,” she continues. “They have different…ways of working, but you make use of that studio space for different things. And…also the field changed, so now…basically everybody expects to have a studio when they come in — it’s a general requirement of any baseline MFA program.”

As the School of Art grew, so did its reputation, giving it a ranking among the top five public university art programs. “I think there’s been…conversations…for a long time…at the upper administrative levels,” says Jenik. “for the concept of…having some downtown presence for the arts.” Not long after the School’s faculty asked Jenik to work toward a more unified, cooperative space, she explains, “we were told that there was another need for a building that we were occupying [the Art Annex]…we would be relocated into another space.”

She says, “That was a concern for me because…I just didn’t want to be another mile and another building.” Working with Herberger Institute interim dean Michael Underhill — himself an architect-planner — Jenik seized the chance to expand into downtown Phoenix, increase the School’s appeal for prospective applicants, and benefit current students.

“Instead of just going ‘woe is us’ and having a pity party,” she continues, “I said, ‘Hey, is there a way that we can use the opportunity of getting kicked out of a building to think about the bigger issue of how we need to be consolidated?’” Jenik adds, “We really wanted to develop the school as a cultural hub for the region…and I felt charged…by the faculty…to move quickly.” ASU’s solution was to rent warehouse space from Michael Levine, a developer renowned for his commitment to the preservation and restoration of historic industrial buildings and the downtown Phoenix art scene. Levine counts The Duce (at 525 S. Central), Arizona Cotton (at 215 S. 13th St.), and Bentley Projects (at 215 E. Grant St.) among his renovation successes, and he won the 2007 grand prize in the Arizona Governor’s Heritage Preservation Awards. He agreed to adapt a turn-of-the-century structure housing his own offices and studio space, Levine Machine, at 605 E. Grant Street, leasing 26,232 square feet to the School of Art.

The first phase moves ASU’s painting and drawing graduate programs and studios, together with a critique space and the Step Gallery. The second phase, due to be completed in May, adds the programs for fibers, sculpture, and intermedia. “What’s particularly unusual and interesting about that space as it will be configured,” says Herberger Institute communications and media staffer Deborah Sussman Susser, “is…MFA students in their studios making work, then being able to immediately display it in a gallery setting.”

Students will work in fifteen studios, each sized expansively at 250 square feet. Other areas are designated for a computer lab, project space, a wash-out sink, a flame cabinet, storage for chemicals, and “a little nest for…faculty,” says Jenik.

The move was spurred in part by ASU’s plans for the Art Annex, the historic building currently housing the Painting and Drawing programs on College Avenue in Tempe, but another impetus was the pending massive development taking over the southeast corner of Mill Avenue and University Drive. Both catalysts led to a compressed timeline: preparation for the warehouse move spans only 11 months from its inception last spring to its opening event on January 17. Concurrently, the Ceramics Research Center is moving north on Mill Ave. into the former Borders bookstore in downtown Tempe. The future Step Gallery under construction within the warehouse’s atrium

“It’s sort of nutty,” says School director Jenik with a smile, “but on the other hand it feels like it wouldn’t have happened if a whole bunch of things hadn’t fallen into place. Obviously the construction’s on the fast track, but…if the upper university administrators and leaders hadn’t already been thinking about this…if Michael [Underhill] hadn’t been interim…there were a lot of pieces that kind of fell together.” She continues enthusiastically, “This is really a quantum leap for us…it’s raw space, but it’s fantastic. We’re really thrilled.”

“A common practice in grad programs that’s really nice is that usually once a term or at least once a year they have an open studio…and donors, collectors, the public, other artists…can come through,” Jenik adds. “So maybe we’ll do that with Art Detour but also we might just have our own…we’ll tour the space.”

“One of the great things about having the open studio tours is then they can be part of First and Third Friday,” says Sussman Susser, “and there can be advantages for both…the whole arts community that’s thriving down there…and for the students.”

Undergraduate classes and some graduate studios will remain on ASU’s Tempe campus. “Other art programs…have done this same thing,” says Jenik, “outgrown their facilities and had a satellite facility specifically for grad students.” She continues, “There’s a history of it actually working out well…not just for the program but also fostering activity in the area…so that’s what we’re hoping for downtown Phoenix.”

Part two of this article will explore the warehouse’s venerable history and Michael Levine’s vision for historic preservation and adaptive reuse.

All photos by K Becker.