Where Are the Architects? 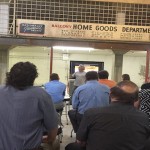 DPJ is launching a new Placemaking editorial series in partnership with the Phoenix Metro Chapter of the AIA (American Institute of Architects). Together we will explore the buildings and structures of our city, look closer at what makes them special, and perhaps challenge those who want to contribute to our built environment to approach downtown development in a more thoughtful way.

The headline got my attention: “Where are the Architects?”

The flyer was an invitation to the March 26th, 2015 AIA Phoenix Metro meeting which would feature a panel discussion of that provocative question: where are the architects? I am familiar with all three speakers and knew I would probably go after reading about the first two. I liked what I saw.

Jim Coffman is a Scottsdale landscape architect Jones Studio worked with when he was employed by the City of Phoenix Parks Department. Next on the list was Mark Stapp, a land planner I first met when he worked for Peter Lendrum’s office. Mark is the Executive Director of the Masters of Real Estate Development (MRED) Program at ASU. He is a gifted educator. So far, so good.

I was fairly sure I would be going. But then I saw the name of the third panel member: Michael Levine. That’s it, I’m in. Levine’s subversive nature makes most activists look like puppies! Our city is lucky to have him. He personifies passion, conviction, and determination.

Michael is very critical of architects. Therefore, we need him. He says things we won’t say. He doesn’t care who he pisses off; especially architects; and especially architects from big firms! Whether you love him or hate him, he is necessary. Not only do I have a tremendous amount of respect for what he does and says, I like him. I like all the panelists so, needless to say, I was excited to attend.

Jim goes first. His power point is well done; his presentation…..nonconfrontational. He demonstrates, through example, street scape, in the right hands, can be transformative.

Mark follows with a very compelling presentation defending the “business” of Architecture. He describes the typical players in development projects and their relationships; most importantly, the dependence of the players on one another. Mark doesn’t preach, he just lays out reality, almost as if it could be a mathematical equation with a fixed set of outcomes. Nothing particularly confrontational here either.

Predictably, Mr. Levine insults most of the audience in his first 5 minutes. Since I am not singled out for a beating, I find his presentation to be entertaining and informative. One can be put off by Michael’s aggressive, even angry, speaking style, but know this: he does not ask anything from us he doesn’t ask of himself.

While we advocate for historic preservation, repurposing and the importance of urban continuity, Levine is buying old downtown buildings with his own money to save them from demolition or worse; insensitive development. He does his research. He may know more about the dwindling historic warehouse district than anyone. Say what you will, but Levine actually puts “his money where his mouth is.” Our community gets less bad every time the “Levine Machine” intervenes.

It was a thought provoking evening; many reactions, many opinions.

A few days later, I received an email from Peter Newton. I have always admired Peter’s political savvy and persistence. He is obviously frustrated with architects and wonders why we move so slowly, if at all. His email was expressing frustration, of course! He wondered why, in spite of the panel’s title, no one ever really posed the question: “Where are the Architects?”

Therefore Peter, this one’s for you. Jim Coffman made it clear: urban architecture is more than site plans limited to an invisible boundary we call a property line. In order for our designs to be more holistic and impactful, we need to look beyond the setbacks; embrace the sidewalk, curb, street, across street, etc. Sure, there are legal constraints we use to excuse our timidity, but architects are in a position to integrate a much larger territory. At a minimum, we can use our non-threatening drawings to advance ideas inclusive of adjacent property, habitable intersections and a merging of streets, walks and buildings, until one day there is a significant shift in thinking.

Following Jim, Mark Stapp argued these ideas are subject to the “natural” laws of business. He claimed if architects refuse to acknowledge these forces, their ideas will be expectations. Mark clearly warned, if architects don’t show up, we will be passed over and our cities will be designed by dollar signs and doomed to continued mediocrity.

Committed architects are the first line of defense and guys like Levine are important for our collective consciousness. I’m sure Michael is not immune to fear. He has a young family to support. But his faith in possibility exceeds his fear of bureaucrats and the looming consequence of risk. He cannot hold back. Screw the rules, screw the politicians and yes, screw the architects. In his mind, if we cannot affect, then get out of the way. That is all he asks.

Maybe by now, Peter, you see where I’m going with this. There was validity in all three presentations. I found great value in the speakers’ diverse message and varying levels of assertiveness. Architects need to nurture a combination of all these qualities.

I want architects to fight. I want us to believe our collective intellect can push our commissions beyond contractual responsibility. Regardless of scale, all buildings are big. Therefore, they require big money. No one wants to get hurt…but Levine reminds us all.. collateral damage for the sake of a quality environment is sometimes necessary.

The custom typefaces that appear in this post were designed by the author, Eddie Jones. Inspired by the custom font designs of venerated architects like Frank Lloyd Wright and Bruce Goff, Jones believes that these typefaces add another dimension to his message and hearken back to a time when “words were as important as the beauty of letters.”