At the Center of Chaos 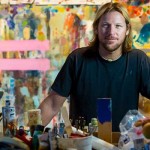 There are a few key indicators that the Phoenix art scene is growing up and coming into its own while still crackling with the edgy energy of a scene that is nowhere near ready to rest on its laurels.  A dynamic example of this electric mix of increasingly sophisticated talent and “hey kids let’s put on a show” enthusiasm is embodied in what is arguably THE do-not-miss show of the year, Legend City’s Chaos Theory. Slack surrounded by the yet-to-be-unveiled art of Chaos Theory 14.

Now in its 14th year, Chaos Theory, an annual invitational exhibition, is the brainchild of Phoenix-based painter, Randy Slack. It grew out of a conversation he had with another local artist, Jeff Falk, back at the turn of this century, about how cool it would be to do a show and get every Phoenix artist they knew to submit one piece each, so “we could see what everyone was doing.”

Artists tend to work in isolation, tucked away in their studios, and Slack saw this as a chance to bring everyone together in one place. “Basically,” said Slack, “I just made a list of artists I knew and started calling people up. It didn’t seem like it would be a big deal.”

But a “big deal” is what it has become, not only in the depth and breadth of the work on display, but in the eager anticipation of the art-loving public that turns out in huge numbers each fall to see what comes together. Over the years, many of the core people are still participating, but both the show…and their careers have grown and evolved over time.

Slack still gets on the phone and personally invites people to submit and still has no idea what the work will be until they drop it off. The point of the show is really about the range of people in it, not just the art. While the majority are dedicated artists, some are full-time arts advocates/part-time artists and Chaos Theory is a chance for them to showcase their own creative work. Now 41, Slack was 27 when he organized the first Chaos Theory in 1999. He stopped drinking two weeks before the first show opened and has spent the ensuing years creating his own successful career, as well as leading what he calls “a kind of double life” as a loving husband and soccer dad to two girls.

Fourteen years later, Chaos Theory is still entirely a labor of love. He is quick to point out that there is no money involved, no corporate sponsors, no big marketing campaign and he doesn’t take a cut of the sales. There is a minor $20 fee that each participating artist pays to help Slack cover the cost of hanging the work, getting lights, and buying food. People buy the pieces directly from the artists.

“Chaos Theory is a barometer of the downtown art scene,” says Slack. “People are really attracted to the show because it is a culmination of the pure love of making, creating and sharing art.” Legend City is a full-time working studio for both Randy and his studio mates – photographers Jon Balinkie, Jason Grubb, and Brandon Sullivan. Because it is a full-time working studio space, the Chaos Theory exhibition has traditionally only been up for the one night – the First Friday in October. “Because it only lasts a minute,” Randy says, “it’s the freshest show in town.”

The only real marketing collateral is a postcard that Slack creates each year, mainly so people can have a keepsake of the event. The postcard is usually completed about two weeks before the show and serves as “the reveal” of the participating artists that year.

These additional opportunities to see the work are an example of the ways in which the show and the scene is changing. Public demand has made it necessary to extend the options beyond one night. Additionally, more and more artists are eager to be a part of the show. That is, perhaps, the most difficult part of the whole process for Slack. “It’s getting to be that I’m tugged in a bunch of directions.” Since he is involved in every part of the exhibition, from inviting the artists,to creating his own painting for the show, to creating the postcard, to hanging the work, to hosting the event, it’s an exhausting undertaking.

But, just as he has grown older and wiser, the show has grown better and better, but still carries the integrity of its original purpose with it. And while it is tough to turn people away, Slack remains dedicated to his first intention – inviting his fellow artists and friends, many of whom are now extremely successful – to bring their work together in one place, “to see what everyone is doing.” Of course, Randy Slack is more than just the guy who puts together the Chaos Theory exhibition every year. He’s a native Phoenician, a talented and prolific artist, a dedicated husband and father, a keen surfer (ask him about Big Surf), and has spent the last five years bringing a 1951 VW Beetle (pictured above) back to its glistening former glory. He’s a true Renaissance guy with a seemingly bottomless reservoir of generosity when it comes to creating a place where artists and the public can come together and revel in the talent and the love that makes the Phoenix art scene unbeatable.

Special thanks to Legend City boys for their technical assistance.

Where: Legend City Studios, 521 W. Van Buren (parking and entrance on south side of the building), turn south on 5th Ave and right into the parking lot.