The Music of Black Angels 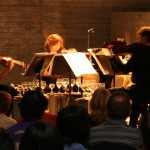 In a spacious gallery filled with the striking and innovative work of 60 artists, four musicians share the spotlight on a small stage. Although they’re playing traditional acoustic classical instruments – violins, viola, and cello – the sounds they create, alternately disturbing and hypnotic, are anything but conventional.

“It’s a real point of civic pride,” says DCS founder and Phoenix Symphony musician Mark Dix. “Of the downtown arts community, Chaos Theory really is the annual show people want to [show] in, because each artist is only allowed one piece, and that piece has to be created that month –- thus the term ‘chaos’.”

“These artists in our community who have been here through thick and thin and whose output continues to deepen are just such a treasure,” Dix continues, “and that’s why Downtown Chamber Series exists.”

He explains, “There are lots of opportunities to do chamber music in town, but the visual art is really the true inspiration, and being able to see concerts like this in a room that’s reaching the senses on multiple levels.”

“When you go to see a gallery exhibit,” Dix elaborates, “you’re typically only standing in front of a given painting for a few seconds before you move on to the next one. Being able to have a concert in the space,” he concludes, “[allows] people to sit and really absorb the mastery of this stuff.”

Chosen by Dix, the unusual musical repertoire sets these performances apart from any other chamber music in the Valley. The program begins with a charming early quartet by Beethoven, then continues with the slow second movement of Franz Schubert’s “Death and the Maiden” quartet, poetically named for a song the composer reused as a theme. Nearly 150 years later, American composer George Crumb was inspired to use that same lyrical theme in his work Black Angels (Images I): Thirteen Images from the Dark Land, written for amplified string quartet. More of a theatrical piece than strictly chamber music, Black Angels weaves a surreal, unsettling soundscape as it conveys Crumb’s intent: a voyage of the soul in three stages of departure, absence, and return.

Crumb wrote the quartet in response to the Vietnam War and other turmoil of the era, says Dix. “We had the assassinations of Kennedy, of Malcolm X, of Martin Luther King, Jr.…we had the inner-city neighborhoods on fire,” he explains. “So all of these things wrapped into the emotions of a given age.”

“This piece has titles and elements in it that allude to Vietnam,” he continues, “such as sounds of insects in the jungle and the terror of war.” It’s also deeply and thoughtfully encoded with symbols and numerology, Dix says.

“The whole piece has a lot of math loaded into it, 13 being the devil and seven being godliness,” he elaborates. “So you have these two things that are juxtaposed against each other – 13 and seven occur throughout the piece.”

Although the string quartet performs surrounded by wine glasses, the drinkware isn’t used for any alcohol-related enhancements. Instead, each glass is painstakingly tuned to a specific pitch and used as a musical instrument, as specified by Crumb’s score. “Three of us are playing wine glasses – we each have about seven of them, and then the cellist is playing a solo on top of that,” says Dix. “So, similar to the sound of bells, using a wet finger on the rim of the glass creates a vibration.”

It’s an ethereal sound that contrasts sharply with other effects in the piece. At one point Crumb instructs the players to lower their instruments from under their chins and instead play them between their knees.

“When it gets into that gorgeous chant-like section, it’s a reference to the ‘Death and the Maiden’ theme from Schubert,” says Dix. “We hold our instruments as if they’re viols,” he describes, “which forces us to play rather expressionlessly, and the sound becomes much more tenuous and weak…a medieval type of sound.” Crumb’s intention was to parody a Spanish Renaissance sarabande.

“I think pulling that dark theme from the Schubert quartet was something that spoke to him,” Dix speculates. “And it’s got a beautiful solo on top of it, and that very meditative moment, and you just want it to continue,” he says, “but then it gets truncated.” Dix laughs. “And then it gets back into this battle of heaven and hell.”

“So you have these multiple things going on,” he continues; “the pitches being generated on the string, the string being hammered with the thimbles, and then the hammers moving up and down the string. And that effect is very delicate, and it can really only be heard by the person holding the instrument, not by an audience.”

The solution, decided Crumb, was to use microphones, not to add to the audio palette but to amplify those sounds created by the musicians. “Those effects are created by his masterful detail in the score, not by someone on a sound board with a computer,” Dix clarifies.

“What I’m getting at,” he continues intently, “is that the percussion elements are not employed to just be cute or unusual. They’re really employed by a very sophisticated composer to take us to a place.”

He compares Crumb to skilled soundtrack composers like Ennio Morricone and Bernard Herrmann. “We experience this all the time in a film score,” says Dix, “when we see a movie and there are things employed by a composer, be it on a synthesizer or hopefully by a full orchestra, which really magnify the intensity of a murder scene, or of any emotion you can imagine.”

“It takes me to an emotional place of relevance,” he elaborates, “where I can relate to this art that he’s created.” Dix smiles ruefully. “On a personal level I was just hungry for a heavy program that really dealt with some darker thoughts and emotions.”

“It’s sort of like when you’re going through any type of hell in life; when the good moments come up, you want them to last longer, and they don’t. They get chopped off.” He pauses. “And when the bad moments are happening, they’re interminable, and you want them to end. So there’s the sort of schizophrenic nature of it.”