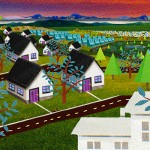 As a part of the 3CarPileUp exhibition, local film and video artist Perry Allen (a periodic contributor to DPJ) will premiere his new animated work, “Town of Product.”  In 2012, Allen was awarded an Artist Project Grant Distinguished Merit Award (that’s a serious mouthful!) from the Arizona Commission on the Arts to create this piece, which premieres tonight.

“Town of Product” is an animated installation using still image advertising from the 80s to create 24 hours of life in a suburban town, complete with people that move down streets, peek in windows, and shop; breezes that ruffle trees, in world that interacts. Perry Allen digitally animated the project to reflect this 24-hour cycle then sped it up to screen in 24 minutes.

“There was kind of an interesting documentary element to the project,” said Allen. “I put out a call to my network of friends and contacts looking for examples of print advertising and people started sending me all these magazines from the 80s. I didn’t start with a focus on that time period, that’s just what happened.” The ads that Allen used came from the leading mainstream, pop culture magazines of the time – such as Vanity Fair, Rolling Stone, Vogue and Cosmopolitan, to name a few.

Every element of the town comes from the ads Allen discovered in the magazines: houses, trees, people, cars, and buildings. “There’s no storyline,” says Allen. “It’s more of a meditation on time and place, on our consumer culture and suburban lifestyle as it looked thirty years ago.”

To make it even more interesting, Allen was inspired by a conversation with Kimber Lanning to project the video onto the windows of Modified instead of an interior wall. In this way, the installation will be visible from both inside the gallery and to the people passing by on Roosevelt Street. Should be pretty cool!

The exhibition runs through June 7.