Wire | Park it on Park(ing) Day 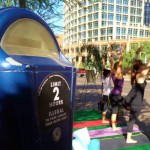 In cities around the globe, this Friday, September 20th, artists, activists and citizens will temporarily transform metered parking spaces into public parks and other social spaces, as part of an annual event called “PARK(ing) Day” during morning rush hour at two locations in downtown Phoenix and one location in downtown Tempe.

Originally invented in 2005 by Rebar, a San Francisco-based art and design studio, PARK(ing) Day challenges people to rethink the way streets are used and reinforces the need for broad-based changes to urban infrastructure. “This is not a day to protest, but a day to rethink how we use our public space to feel a sense of connection and community engagement within a large city.  If Phoenix is to thrive, walkability and connectivity need to be important factors moving forward.  Small, green, public spaces feed the soul.” says Champion.

ASU students from both the downtown Phoenix and Tempe campuses will also be taking part in the event with students Connor Descheemaker and Mitchell Bobman leading the ASU locations.

There will be three organized morning locations:

PARK(ing) Day is an “open-source” user-generated invention created by independent groups around the globe who adapt the project to champion creative, social or political causes that are relevant to their local urban conditions. More information is available on the PARK(ing) Day website, at http://parkingday.org.