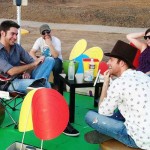 In cities around the globe, this Friday, September 21st, artists, activists and citizens will temporarily transform metered parking spaces into public parks and other social spaces, as part of an annual event called “PARK(ing) Day” during morning rush hour at two locations in downtown Phoenix. Originally invented in 2005 by Rebar, a San Francisco-based art and design studio, PARK(ing) Day challenges people to rethink the way streets are used and reinforces the need for broad-based changes to urban infrastructure. “In urban centers around the world, inexpensive curbside parking results in increased traffic, wasted fuel and more pollution,” says Rebar’s Matthew Passmore. “The planning strategies that generated these conditions are not sustainable, nor do they promote a healthy, vibrant human habitat. PARK(ing) Day is about re-imagining the possibilities of the urban landscape.”

This will be the 4th annual Park(ing) Day event in downtown Phoenix. The Phoenix event is organized by Stacey Champion, Founder of the local sustainability group, Rogue Green. “When Yuri Artibise helped launch our 1st Phoenix Park(ing) Day four years ago, we had a group of maybe a dozen people participating. Now we have closer to 100! This is not a day to protest, but a day to rethink how we use our public space to feel a sense of connection and community engagement within a large city. If Phoenix is to thrive, walkability and connectivity need to be important factors moving forward. Small, green, public spaces feed the soul.” says Champion.

There will be two organized downtown morning locations:

Since 2005, the project has blossomed into a worldwide grassroots movement: PARK(ing) Day 2011 included 975 “PARK” installations in more than 160 cities in 35 countries on six continents. This year, the project continues to expand to urban centers across the globe.

PARK(ing) Day is an “open-source” user-generated invention created by independent groups around the globe who adapt the project to champion creative, social or political causes that are relevant to their local urban conditions. More information regarding local PARK(ing) Day activities can be found on Facebook. and a global map of all participating cities are available on the PARK(ing) Day website, parkingday.org.