Park(ing) Day – What was that About? 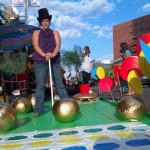 Guest blogger Courtney Nush provides insight into an event that celebrated by some and left others scratching their heads.

The look my boss gave me when I told him I was taking a Friday off to commandeer a parking space in Downtown Phoenix and turn it into a Willy Wonka-themed “park” for the day, is a look that I’ve become all too familiar with in the year and a half I’ve lived downtown. 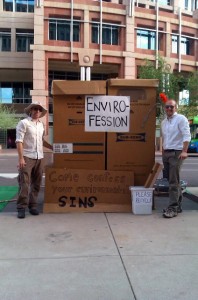 Dovid Gorman and Richard Darby with their Enviro-Fession booth

It’s the same look I get from friends and co-workers who live and work in Scottsdale when I try to tell them about a cool pop-up restaurant they should check out. Or the one from my family, who happily resides in the West Valley, when I tell them I’d prefer to live in an 800-square-foot condo between the sevens rather than a three bedroom house in Goodyear. It’s a facial cocktail of confusion, amusement and this sort of distant sense of curiosity about what it must be like to live “down there.”

The look is usually followed by some variation of the same question, “Is this one of those downtown things you do?” Yes, yes it is. In fact, Park(ing) Day isn’t just a “downtown thing” in Phoenix, but something folks in urban cores across the globe have been participating in since Rebar, a San Francisco-based design firm, started the project in 2005.

The vision started by Rebar six years ago manifested itself on Washington Street, across from City Hall, on the morning of September 16. These nine “parks” had themes ranging from my “Wonka Park,” filled with fake lollipops and giant mushroom chairs, to a bike park offering to fill up tires and tighten loose components. There was an “Enviro-fession” booth set up by Midtown residents Richard Darby and Dovid Gorman where people passing by could confess their environmental “sins,” and a more traditional park with trees, lawn chairs and a trampoline set up by Stacey Champion of Rogue Green, who organized and publicized the event. 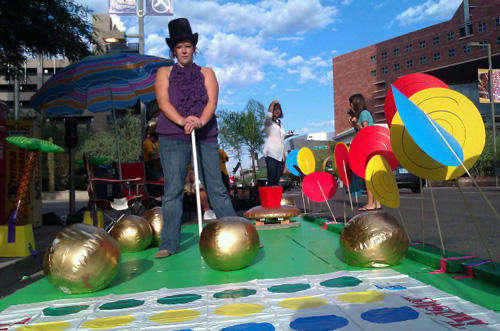 According to parkingday.org, the mission of the event is to “call attention to the need for more urban open space, to generate critical debate around how public space is created and allocated, and to improve the quality of urban human habitat.” 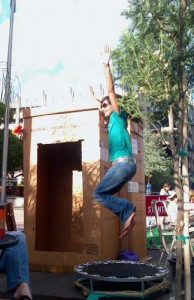 Stacey Champion in her park

While the 40 or so of us participating in the event were certainly having a good time in our parks filled with golden eggs, trampolines and Dixie bands on Friday morning, this is exactly the mission and message we were trying to support. We want Phoenix, both the community of residents living here and City officials, to take the incorporation of people-friendly spaces in the urban core seriously. We want the City to stop approving $17M parking garages and start supporting initiatives for amenities in our neighborhoods and pedestrian-friendly public space.

Simply put, those of us who participated on Friday want to see more space allocated to people and not to cars. I don’t expect (or want, necessarily) to see a permanent Wonka Park anytime soon in Downtown Phoenix; but I would like to see community amenities like dog parks, community gardens, parklets and other useful urban green spaces in some of the space currently occupied by cars and empty brown lots.

I’d like to see a different look in the eyes of people who live outside the downtown core when I talk to them about what’s going on there — a look of interest and pride for the core of their city. That’s probably the sugar talking; but what can I say — I ate a lot of Laffy Taffy that day and I’m riding this sugar high as long as possible, imagining what Phoenix could be like if we all embraced our inner Wonka and allowed Phoenix to be a world of pure imagination.

“If you want to view paradise, Simply look around and view it. Anything you want to, do it. Want to change the world? There’s nothing to it.”  — Pure Imagination, Willy Wonka & the Chocolate Factory