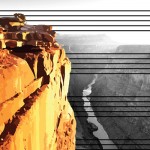 Music and art—they seem to go so well together. It just sort of rolls off the tongue: musicandart, artandmusic.

For some of us in grade school, they were even taught at the same time and maybe even by the same teacher. If you were good at one, there was a good chance you might have been good at the other.

Then maybe you go to college, or maybe you don’t, but either way a person ends up traveling down a path that is predominantly music OR art. Somewhere in this process, a person might keep ties to both and some people even manage to integrate it seamlessly with the work they do, but most lean to one side or the other.

The artist stares longingly at the violinist, remembering what it used to feel like to labor over a solo. The violinist attends art openings to vicariously sense the feeling of creating a new body of work.

How did we become so separate?

I will admit that I am one of those people. I used to play flute and bass guitar and believed that I could really be amazing at both music and art but at some point, I felt I had to choose to make one or the other better or risk being mediocre at both. The word “dilettante” kept jumping to mind. Should there really be such a grand canyon between us? Graphic by Jen Urso

Maybe this explains a phenomena I have troubling understanding in our sunny city: the Grand Canyon of a divide between the art and music communities. I discovered this after meeting my partner who came from a music background into multi-media artwork. It seemed like a natural progression. I assumed we would have a lot of friends in common. But, it turned out that we knew virtually none of the same people. How could this be?

Artists and musicians share a lot of the same struggles: attempting to make a living while doing the thing you’re good at; fitting in time to practice while managing the making a living part and all of life’s other sundries; determining whether to go the more commercial or more independent route; and fielding all of the inquiries from family members/friends/acquaintances about what you really do. It seems we’d have a lot to talk about with each other.

It also seems as though we’d have a lot to collaborate on. While we’re working at putting together new multi-media pieces and staging impromptu events in vacant lots, members of both communities could step outside of their familiar zones and try something that lands in the middle. In the process of brainstorming, we might even realize that our creative processes are very much the same. John Cage, Merce Cunningham and Robert Rauschenberg collaborated often in the 1950s to 1970s, generating multi-faceted pieces that would have been very different had they been coming from a solo perspective.

Mingling of these worlds surely occurs from time to time but, as both communities struggle for audiences, respectability and a place in the cultural landscape of Phoenix, we could benefit from joining forces more often. Each group brings its own audience that is likely unknown to the other’s. By intertwining mediums and people, we broaden the artistic landscape for both. Downtown Chamber Series has managed this successfully with their performances that take place at various art spaces downtown. They can promote the show and their own concert—promising their audience a dynamic experience that they may not have sought out alone. Before long, both audiences could potentially double while also adding something new to our experience of culture here.

Closing the gap between these two worlds doesn’t have to mean jumping to the other side. It could simply mean acknowledging that we’re both really after the same things. We’re not so different, after all.