Putting the Public in Public Art 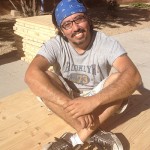 Hugo Medina is a force to be reckoned with; he’s not just a talented muralist and the winner of the Public Art Award category in the newly announced Mayor’s Arts Awards, he’s someone who can rally a community and make things happen.

In this case, that “something” is an extraordinary public mural that will emerge over this weekend at the inaugural Phoenix Festival of the Arts. The mural will be extraordinary in both size and scope and it took a dynamo like Medina to make it all work.

Using Facebook, Medina put out a call to artists to participate in the project. “I wanted a diverse group of artists to get involved,” said Hugo. “Everything from accomplished muralists, to fine artists, students, graffiti artists, and novice painters.”  Over 80 artists responded to his call.

Medina’s concept created a simple but elegant way to bring artists into contact with each other and the public. Each of the 80 artists will have a 4’ X 8’ wooden panel (donated to the festival by Home Depot) to make their own. In between each artist panel will be a blank panel where the community will be invited to participate. The two artists working on either side of the blank panel will collaborate on an idea for the community to realize.

This allows for each artist to make their own work, but also gives artists who may have never met previously the chance to work together. The only restriction on the work is that it not be negative and that it is in some way focused on Downtown Phoenix. By placing the blank community panels between the two artist panels, Medina is hoping that a natural flow will develop from one panel to the next.

The mural will be completed during the three-day festival and when done, will consist of 160 four-foot high panels, stretching for 1,280 feet.  There will be several mural stations throughout the festival where the public can watch the artists work, or grab a brush and participate. Everyone is invited to lend a hand and make their mark, including kids.

Bring the whole family down to Hance Park this weekend to the Phoenix Festival of the Arts to make your mark on this unique public art project that is bringing artists and the public together to create something everyone can be proud of and enjoy.

“Come Monday morning, I’ll be working with the City of Phoenix to pack up the panels and move them to the corner of Central and Indian School,” said Medina. This is the new  PHX Renews site at Indian School Road and Central Avenue; a large empty space that has been activated into temporary multi-use public space. “I’ll curate the placing of the panels around the park,” he continued. “Some will be placed along the fence to make them visible from the street, and others will be scattered along the paths within the fenced space.” The panels will remain at the site for the next three years.

Event: Community Mural at Phoenix Festival of the Arts

Supported by: Artlink and made possible through a donation from Home Depot

When: Friday, Dec 7 through Sunday, Dec 9

What’s required: Your creativity. Paint, brushes and wood panel canvasses will be provided.