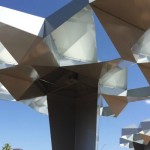 Networking reception and ribbon cutting ceremony in celebration of the recently completed Phase 1 of the Roosevelt Road public art and streetscape improvement project in the Evans Churchill Neighborhood of the Roosevelt Row Arts District in Downtown Phoenix. Photo: City of Phoenix Office of Arts and Culture

Representatives from the city of Phoenix will gather with community members to celebrate the recently completed pedestrian- and bicycle-friendly improvements on East Roosevelt Street. The Roosevelt Street Improvement Project started as part of a community-driven effort to enhance the pedestrian environment in the heart of the Roosevelt Arts District.

The project demonstrates the city’s shift to create “complete streets” that are designed to enable safe access for all users; including pedestrians, bicyclists, motorists and transit riders of all ages and abilities.

Additionally, the triangle between Third and Fourth streets was significantly upgraded to create a unique downtown gathering space for area visitors and residents to enjoy. The newly transformed space features the art piece “Shadow Play” by Meejin Yoon, a solar-powered shade structure that lights up at night created and includes decorative seating benches, and new landscaping.

The second phase of Roosevelt Street improvements will span Fourth to Seventh streets, and is currently under design. The project entails similar improvements. Construction for phase two is anticipated to begin later this summer.

WHERE: Roosevelt Triangle – between Third and Fourth streets