A Russian Pianist Picks up the Baton 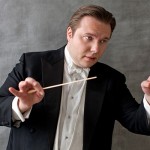 After eight years as music director of The Phoenix Symphony, Michael Christie will step down at the end of this season. From Arizona he’ll be heading to the upper Midwest as music director of Minnesota Opera, a job he began this fall in tandem with his duties in Phoenix, and he’ll also continue to lead the Colorado Music Festival. As Christie wraps up his tenure in the Valley, the Symphony seeks to fill his position by auditioning a series of possible successors in front of the orchestra’s musicians, administration, and audiences. Two candidates have already left their mark on the orchestra: Sarah Hicks from the Minnesota Orchestra, and Tito Muñoz of the Orchestre symphonique et lyrique de Nancy (the Symphony and Opera Orchestra of Nancy, France).

A third guest conductor leads performances tonight at Scottsdale Center for the Performing Arts and tomorrow at Symphony Hall. Born in Moscow in 1972, Ignat Solzhenitsyn studied both piano and conducting at the Curtis Institute of Music. He’s the son of the Nobel Prize-winning author and dissident Aleksandr Solzhenitsyn (The Gulag Archipelago and One Day in the Life of Ivan Denisovich).

Ignat Solzhenitsyn divided his time between working at the keyboard with celebrated teacher Gary Graffman and studying the baton with Otto-Werner Mueller, an equally eminent professor whose influence can be traced through several generations of conductors. Solzhenitsyn also learned from cellist and conductor Mstislav Rostropovich, he says.

“Rostropovich really taught me how to think about music, how to project character and gesture in conducting; Mueller added his meticulous analytical sense and exacting technical training.” These characteristics must be combined for the best overall conducting technique, explains Solzhenitsyn. “The paradox of Mueller’s method might be distilled in two seemingly contradictory admonitions that ring in my ears to this day: ‘Don’t just beat time!’ but also: ‘One can never be too clear!’” Solzhenitsyn goes on to describe how he studies new works. “Roughly speaking,” he explains, “there are two ways to study a score: vertically and horizontally. The vertical yields foundational knowledge – what happens in (each) bar? How are these bars linked?”

The “horizontal” way to study is more time-consuming, Solzhenitsyn says, but he elaborates on its importance. “In studying the various layers — which might be a single instrumental line, or dynamics, or articulation, or pitch range, or string muting, or transposition changes — one arrives at a more subtle and ultimately deeper understanding of the whole.”

Solzhenitsyn’s credentials are hard to top; he won an Avery Fisher Career Grant, a $25,000 prize awarded to musicians with great potential. It’s an esteemed honor for which the winners don’t even know they’re under consideration until they receive a congratulatory phone call.

Along with an ongoing touring schedule as a pianist, Solzhenitsyn is Conductor Laureate of the Chamber Orchestra of Philadelphia and Principal Guest Conductor of the Moscow Symphony Orchestra. He also serves on the piano faculty of the Curtis Institute.

Solzhenitsyn doesn’t take his job lightly. “When conducting great music,” he says, “I always feel a deep sense of privilege and responsibility to the composer. Most of all, I try to share my love for a given piece of music with the musicians of the orchestra and, ultimately, with the audience.”