The Heart of a Food Truck 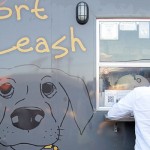 Kat Moore prepares a hot dog for a happy customer.

Nothing says love like cooking up some hot dogs.

For Brad and Kat Moore, owners of Phoenix’s famous Short Leash food truck, the love for their business and community keeps the couple constantly smiling as they serve gourmet hot dogs to devoted “superfans.”

Even with a line of eager foodies collected outside its window, the food truck’s atmosphere remains calm, carefree and always welcoming—all thanks to the dedicated couple who say they are simply doing what they love.

“This is the most work I’ve done in my whole life, but it’s also the most fun,” Kat said, tying on her apron before a Wednesday dinner rush. “It’s really tough, but it’s awesome at the same time.”

What started out as a hobby soon turned into a full-time job for the couple, who spend six days a week working together to keep their business booming and their customers happy.

A middle-aged man sporting a gray Short Leash T-shirt passes by the window as Kat preps ingredients. “Short Leash rules, man!” he yells into the trailer.

“Awesome! Yeah!” Kat yells back, laughing. Kat said that she and Brad have been overwhelmed with support ever since the business started in 2010. Back then, she added, neither of them had any idea what they were getting themselves into.

Before the birth of Short Leash, Kat asked Brad, “If you could do anything you wanted, what would it be?” Brad’s immediate response: “Open a restaurant.”

Kat said that Brad had been working in a bank at the time, while she had an interior design business. Both of them wanted something more, and they began to ask themselves, “What are we doing and why are we doing it?”

After Kat told Brad to downscale his idea a bit for the sake of their bank account, he suggested the food truck plan.

At first, Kat immediately said no. It wasn’t until she later saw an intriguing TV show on food trucks that the hesitant wife finally warmed up to the idea, and the couple decided to give it a shot.

“Honestly, if I had known how much work it was going to be, I probably would have (continued to say) no,” Kat said, laughing. “But ignorance is bliss, and eventually, we figured that out.”

When Short Leash was just two months old, Brad quit his bank job to work in the food truck full time. “We said, ‘let’s just do this,’” Kat explained. “So we did. And I told (Brad) that if it doesn’t work out, we’ll both just work at Starbucks or something.”

Slow down to hurry up

The Wednesday Phoenix Public Market starts up at 4 p.m., so when 4:20 rolls around with no word from her husband/business partner, Kat gives Brad a call to hustle him along. “Where are you, Pumpkin?” she asks into the phone.

Both of them fill equally important roles when the truck is running. Brad acts as the face of Short Leash by greeting customers and taking orders, while Kat cooks up the dogs and adds on all the extras—anything from mango chutney to goat cheese crumbles.

Brad arrives just minutes later wearing a blue Short Leash T-shirt to match his wife’s. The two continue to complete various preparation tasks, squeezing by each other in the tiny 80-square-foot trailer filled with coolers, a grill, a prep station and deep fryers.

“Suck it in!”  Kat yells playfully to Brad as she makes her way to the grill. With so little space, Brad and Kat must stay organized and work as a team to keep up the natural flow of the food truck. When they really get going, Kat said that the couple can pound out a dog a minute, which allows them to keep their wait time to a minimum.

“Everything is process-oriented, and there’s a science to it,” she added. “It’s an efficient process, and when you can move that quickly, there’s no reason to really get stressed.” When the brand new business experienced its first whopper of a line outside the trailer, Kat said the couple started to understand what they had gotten themselves into. Brad had turned to Kat and warned, “Don’t look out the window.”

“At that point, I thought, ‘What would happen if I just left?’” Kat said. “You know that saying that goes ‘slow down to hurry up?’ Well, that’s basically what I had to do.”

The couple practice incredible teamwork to keep everything running smoothly, and they stay miraculously levelheaded during their busiest times. But although they may seem calm, Brad said that “the panic is there.”

“We just focus on the customer,” he added. “We try to make eye contact, and it’s OK to just ask how their day is going. We want everyone to feel welcome and encourage them to return.”

Although Brad and Kat’s system for whipping up dogs kept the business moving at a fast pace, eventually, the couple decided that a few extra hands wouldn’t hurt on their particularly hectic days.

About a year after Short Leash opened, Kat said they decided to hire on some help.

Christina Hernandez, 22, comes in just before the local farmers market really gets bustling. She puts on an apron and a huge smile, then jumps right in at the prep station to wrap the dogs in wax paper and give them the presentational touch.

The Moores have a total of three additional staff members that they rotate in on busy days. Although Hernandez just started in September 2012, she said her experience in the food truck has been unlike any other.

“So far, it’s just been a blast,” Hernandez said. “I’m learning new things, and I’ve gotten to learn about all the different stations back here.”

She added that the toughest part was adjusting to the fast-paced environment and extreme temperatures the team faces throughout the summer months. On one of her first days with Short Leash, Hernandez said she had to leave because the heat became unbearable.

“That was like her initiation,” Kat said. All three of them laughed in agreement.

Even in a confined workspace, the team works effortlessly in its well-structured assembly line. But no matter how many customers line up at the window, the constant laughing and joking inside the truck keeps its mood light-hearted.

Hernandez said that the job is tough, but she never finds herself stressed out.

“Getting used to the small space was hard at first,” she added. “But everyone has been awesome with helping me out, so I haven’t had to deal with too many problems. I really can’t complain…yet.” Brad and Kat both laugh. Without even hearing the sizzling sausages or smelling the fresh toppings, a customer can be drawn to Short Leash by the staff’s welcoming demeanor. Brad greets many of his customers by name, and he can usually even predict what they will order before they utter a word.

“You’re OK with the mayo on that one, right?” he asks one of his regulars who orders the week’s specialty dog.

“That’s what I thought,” Brad replies with a confident nod.

After handing off the order to Kat, he heads right back to the window to smile and greet the next in line. When orders are ready, he calls the customers by name, gives them a polite ‘thank you,’ and encourages them to come back soon.

“The best part is just working the window, meeting all these new people, and talking to them,” Brad said. “Even if we do grow bigger, we’ll still keep this a community thing.”

While people have told the couple they should grow and expand, they both said the timing isn’t quite right. Kat added that they love having a small, intimate customer base, and when it comes to growth decisions, they have to stay true to themselves.

Short Leash has become somewhat of an icon for Phoenix foodies and frequent market-goers. Food Truck Friday, an event the Moores started themselves, recently celebrated its second birthday on Nov. 2. With the event’s evident success over the past two years, it seems that that the food truck trend is here to stay.

For Brad and Kat, the success is great—but their mission has always been more simple.

“Our goal originally was to just do the best we can, and to do whatever we can do,” Kat said. “But now, it’s about being around people that we want to be around, and about doing a job that really makes us happy.”