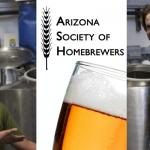 Angels Trumpet Ale House announced this week that it will be featuring local homebrewers as part of its Saturday, September 15 Grand Opening. On hand will be Uptown Phoenix residents and award-winning homebrewers, Scott Brady and Marco Hernandez. The two will brew a five-gallon batch of beer while providing information on how you can join this growing hobby. The brewers will begin setting up their equipment at 10 a.m. on the patio and should be mashing grain by 11 a.m.

Angels Trumpet would like new brewers to drop by, learn, watch, ask questions and take breaks inside for beer. Brady and Hernandez will also be able to recount their experience brewing one of their beers commercially, so there is plenty of things to discuss for veteran brewers too. Both brewers are members of the Arizona Society of Homebrewers (ASH), the largest homebrew club in the country. Last October the brewers were awarded Best of Show in the 2011 ASH Oktoberfest for Seaside Rendevous, a malty rich California Common. The pair were able to brew their beer commercially at Odell Brewing in Ft Collins Colorado on Doug Odell’s famous five-barrel pilot system. This spring, the beer debuted at Moto on 16th Street and Glendale.

As the President of ASH, I can tell you that these guys know their stuff and are happy to engage you about the hobby. I’ll also mention that the 2012 ASH Oktoberfest Competition has the very same prize–an opportunity to brew your winning batch at Odell.

Who knows? You might even see a fellow with a hat and sideburns tending bar that afternoon.