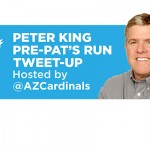 The event takes place on the eve of the 9th Annual Pat’s Run at Sun Devil Stadium.

Tickets for the event are $40.00 with 100% of the proceeds going directly to the Tillman Foundation. Each ticket purchase includes admission, happy hour food and carbo-loading pasta stations, as well as two drink tickets redeemable for draft beer and wine.

There will also be appearances by current Cardinals players, cheerleaders and Big Red.

Space is limited and advance tickets are available now by calling 602-379-0102 as well as by visiting the Cardinals Tempe Training Facility (8701 S. Hardy Dr.) or University of Phoenix Stadium Box Office.

Tickets: $40 each with all proceeds going to the Pat Tillman Foundation

Transportation/Parking: Light Rail to Washington. Park in the CityScape parking garage or nearby meters (free after 5 p.m.)