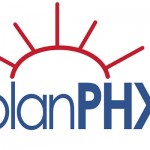 Mayor Greg Stanton, City Council members and community members launched on Thursday planPHX, an interactive and innovative way for Phoenix residents to decide how the city grows and changes over the next 10 years through their involvement in the update of the city’s general plan, such as planning for neighborhoods along the light rail line.

A community-centered initiative, planPHX involves an interactive and innovative website, a community-member powered steering committee and public forums all for residents to submit their “big ideas” to city leaders and planners.

“This is your city, your community, your neighborhood, and we want your ideas to make it great,” Stanton said. “How Phoenix looks in the next 10 years, a happening downtown, light rail expansion, it’s going to depend on you. Let’s work together to be a part of Phoenix’s history and future.”

A Not-so-General Plan
Phoenix last updated the city’s “general plan,” a blueprint of how Phoenix will grow and change in a 10-year timespan, in 2002. Some of the existing plan’s accomplishments include the adoption of the Infill Incentive District, which promoted redevelopment in and around downtown, the adoption of several village core plans and policies that require new development to “pay for itself” when developing near the city’s edge.

This year, planPHX will construct the general plan by answering questions like “What do you love about Phoenix?” and “What’s your big idea for Phoenix’s future?” to help the city plan to conserve elements that residents value and work to create the elements residents want. The goal of planPHX is to “conserve, create and connect” Phoenix’s future with ideas from the community. Additionally, planPHX will offer residents along the city’s light-rail line the opportunity to work with the city on plans for their neighborhoods to reinvent planning and maximize investment in the light rail. Five transit districts along the metro light rail are the focus and will serve as a new, livable model for urban development in Phoenix.

What’s Your Big Idea?
Knowing community input was key, Stanton, City Council members and the City of Phoenix Planning & Development Department worked together to form a community-member powered leadership committee that will collaborate with staff throughout the project, assist with community outreach, provide research and analysis and ultimately guidance and direction on planPHX. View committee membership list.

PlanPHX also incorporates an innovative way for Phoenix residents of all ages from every corner of the community to get involved, with an interactive website: myplanphx.com. Phoenicians can submit their ideas online, receive feedback from other residents, earn points for their input and win rewards, such as lunch with Stanton, a tour of Chase Field and a behind-the-scenes tour of the Phoenix Police Crime Lab.

City council members and Stanton also will hold planPHX forums throughout the city that will offer opportunities for residents to brainstorm their ideas and receive feedback from peers and council members. Attendance from all residents of all ages is encouraged, and scheduling is in the works to host a forum just for kids. View a list of forum dates and times.

Stanton also will spontaneously go to locations around the city to solicit ideas from the community and encourage involvement. He also will provide local businesses and churches with planPHX suggestion boxes.

“This is more than a plan and map document update,” said Mo Stein, chair of the leadership committee. “This is about setting the future direction and growth of our community, based on overarching guiding priorities that make a great Phoenix. No idea is a bad idea, and I emphasize to everyone how important it is to hear from all neighborhoods and villages of the city. Our final result should be an equally compelling story, communicated with optimism and connectivity to our entire city, no matter location or age.