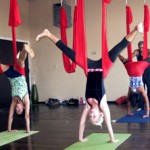 At Ra Yoga, experience the weightlessness of a FLYoga class and get a 90 minute full-body workout while suspended in midair. Flip and twirl through Ra’s yoga hammocks in exchange for a small donation to support local nonprofits.

Instructor Roman Acevedo said participants should not feel intimidated by his class because they can make it as difficult as they want.

“People just need to come in and give it a shot,” Acevedo said. “You don’t need any particular skill set other than the desire to do it. A lot of people come and aren’t sure if they should even be here, but when they give it a try, they’re thrilled.”

Acevedo added that many FLYoga participants surprise themselves after attending a couple of classes.

“The main things I see people improve on are flexibility and strength,” he said. “There are people who come in and can’t do five push-ups or even hold themselves up, but then all of sudden they are doing 10 or 15.” Lizz Tsosie, 26, (left) said she worried about falling during her first experience with FLYoga, but she quickly gained confidence in herself by the end of the class.

“It’s tough, but you have to get over that fear,” Tsosie said. “When I got my balance, and with Roman by my side, it made me realize that I can do it.”

Tsosie added that FLYoga “doesn’t even compare” to regular yoga.

“I really like how you can stretch better when you’re in the air rather than being on the ground,” she said. “It’s relaxing and it’s just so different. And you’re having fun, so you don’t even know you’re getting a really good workout, too.”

Victoria Jasso, 28, began attending classes about three months ago and has attended twice a week ever since. She said FLYoga gives her an opportunity to escape and creates a feeling of “timelessness.”

“Yoga benefits everything,” Jasso said. “It has taught me to trust myself more, which I think is the most important.”

She added that the class strengthens muscles everywhere from her ankles to her fingers, and many muscles she didn’t even know she had.

Practicing FLYoga also benefits more than just the body, because all donations go to nonprofits like The Arizona Opportunities Industrialization Center and UMOM.

“The whole thing allows you to embrace more than the physical and strengthening aspect,” Jasso said. “With Roman’s vision of being purely donation-based, it adds a bonus of not just doing it for yourself, but contributing to a larger cause.”

When: Tuesdays and Thursdays at 6 p.m. (Schedule in advance on Ra’s website) 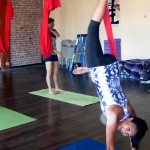 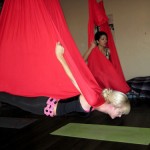 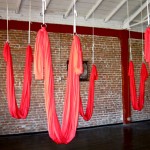 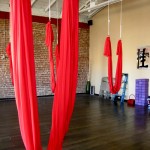 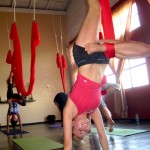 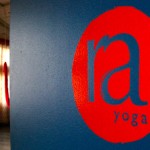