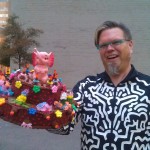 December 23, 2011 by DPJ Staff
(Marshall Shore, is an information curator/pop culture historian who specializes in the quirky, offbeat, mysterious, and lesser known stories of Phoenix’s past.) 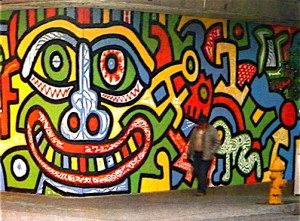 The small parking lot at the southeast corner of Central and Adams, just west of Hanny’s in Downtown Phoenix offers up no hints of the amazing artistic event that took place on this spot 25 years ago this week. The year was 1986 – Terry Goddard was Phoenix Mayor, a Hollywood actor was in the White House, the Apache Trout was named the official state fish, and Halley’s comet shot across our sky – at the same time an artist was on a meteoric climb to super stardom. That artist was Keith Haring, fresh from opening Pop Shop in NYC and painting a mural on the now defunct Berlin Wall.

Haring had arrived in Phoenix to conduct a drawing workshop at the Phoenix Art Museum. During a drive through downtown, he took notice of the lack of art and proposed creating a mural.  A partnership was put together quickly that included Haring, the Phoenix Art Museum, South Mountain High School and the City of Phoenix. The City supplied the paint, and Mike Prepsky, a teacher at South Mountain High School, arranged for about 60 students to work with Haring for a week of December mornings to create an amazing piece of art for downtown. 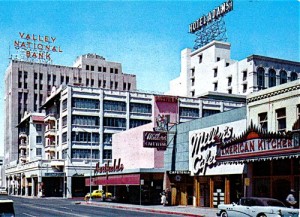 The location was the old Hartfield’s Dress Shop on the South East corner Adams and Central (now a small parking lot). Keith began free-handing the 125-foot mural in his characteristic bold outlines and invited the students to fill in the white spaces. They were instructed to completely fill in their area with bold colors, but they quickly began writing their names, making dots or drawing other images.  When the unexpected additions were brought to Haring’s attention, he recognized they were making the mural their own and they were encouraged to continue. 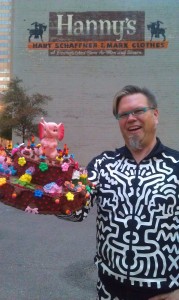 The mural remained on the building for the next five years. In 1991, the City considered selling the mural to raise some money, but stipulations in the original contract stated that it was to be displayed for a year and then destroyed. Because the mural was painted on the untreated plywood that had covered the windows of the building and had spent five years exposed to the sun, it was a wreck and people had begun defacing it. So, the City hauled the Keith Haring mural to the dump and that is where the story should have ended. Later, however, a section of the mural was spotted in an art space on Madison and Central called the Faux Cafe, (now defunct). After that it disappeared entirely and a shroud of mystery surrounds its whereabouts today.

Happy Birthday to the famous Keith Haring mural of Phoenix, on this, the 25th Anniversary of its creation! Prepsky documented the collaboration with a video camera, which included footage of Haring working, the kids painting and various people who visited the scene, including Terry Goddard. Check out the video of Haring and the students in the act of bringing this remarkable artwork to a corner of Phoenix.