Livability: How Does Phoenix Measure Up? 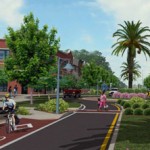 Livability. A (not so) recent buzzword imbued with the notion of active citizenship. At first glance, livability seems to imply that residents are not able to live in their current situation. Is the city killing us? Well, not exactly, but it is debatable that some cities are more “livable” than others.

Would you say you are experiencing livability in your neighborhood? Hearing livability, perhaps you envision Main Street Disney, USA or in contrast, a town you grew up in, like LA or the Bronx, which may not be picture perfect, but you called it home. What exactly is livability and how do we attain it? Or is it even necessary?

Potential for a road remake in Orange Beach, Alabama. Courtesy of walklive.org.

Livability actually introduces the concept that a city meets the needs of its citizens; a city that is mobile, affordable, and accessible to resources and destinations, with numerous opportunities for growth in business, education and community development. The combination of these elements produces a thriving habitat for people to experience life and connect; this is how we were designed to dwell.

If you live in Phoenix, we sadly did not make the top 10 “livable cities” cut. According to Forbes in 2010, Pittsburgh, PA and Ogden, Utah come in strong, with their unemployment rates, low crime, income growth, cost of living, and artistic and cultural opportunities. Yes, believe it or not, livability can actually be measured.  The­ Economist developed the Economist Intelligence Unit as a resource for global intelligence research and analysis.  In the study of the 2011 Livability Ranking and Overview, Harare, Zimbabwe came up as the least livable city, while surprisingly being home to 3 million people, double the size of Phoenix. Factors attributed to this ranking include high levels of petty theft, civil conflict, and poor public transportation. So, even though a city is ranked as “least livable,” people still live there.

How, then, does one develop “livability” in a city? It starts by building from the blocks of living standards: quality health care, culture and diversity, employment and income, affordable housing, high education standards, economic growth, safety, recreation, transportation and access to natural resources. If a city has these areas cemented in their foundation, the people residing within can develop and grow, attributing to their quality of life. Other surveys have been conducted, producing different results. But, of all the results, one fact is clear: if a city is united in its decisions and collaborates to bring decisions to action with the heart of the citizens in mind, happiness is a natural byproduct.

Vision for the road remake in Orange Beach, Alabama. Courtesy of walklive.org.

That is a point The Walkable and Livable Communities Institute proudly illustrates. Founded by Dan Burden, one of the primary leaders in livability efforts, being named by Time magazine as “one of the six most important civic innovators in the world,” the Institute stresses that connected, walkable communities are the primary source for well-built environments and provide options for people to have an “active-living” lifestyle.

In Phoenix’s development over the years, this has not been the case. We are famously known for our “sprawl” and poor design. Ten years ago, ASU and AARP conducted a Livable Community Evaluation Guide, highlighting similar areas of transportation health, and safety as areas to study. Fast forward to 2011, our Downtown area has the wide contrast of the recent Metro Light Rail running alongside empty lots and barely, if any, pedestrian roadways.

To be a more livable city, we first must exist in our space and support initiatives to bring livability to life. How? By supporting local businesses to bring money and keep money in the state, voting for political candidates that support pedestrian development, making our voices heard at community gatherings for city projects and our presence known around  in the streets by biking and walking the Downtown areas, and creating a sense of community. Little by little, we can gather the building blocks to start the process. Together, we possess the ingredients to make this city the next great livable community.