A Resident’s Review of Crescent Ballroom 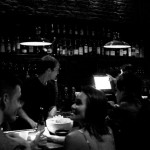 Crescent Ballroom is going to be the death of me.

Thursday was the first night this week I didn’t go to a show at Charlie Levy’s new venue on 2nd Avenue and Van Buren and that was probably a wise decision. A tough one, for sure—seeing Chico Mann and continuing the trend of going to every show on opening week was enticing—but I’ve got to start getting comfortable saying no to the temptation of this place, located just 6 blocks from my doorstep, or it will surely lead to my eventual demise. If I’m being completely honest, at the soft opening on Sunday night I wasn’t completely sold on Crescent. There’s been a lot of hype about downtown Phoenix’s newest music venue brought to us by the owner of Stateside Presents and I sometimes I have this annoying habit of being contrary just for the sake of conversation.

Some of the material selections—brick walls, wood bleachers and tile covered with mirrors behind the bar didn’t make sense to me in a setting intended for music. Clearly, I’m not a sound engineer and I’m glad no one asked for my opinion on these decisions because they work—and they work well. After four shows in four days, I can say with confidence that now I’m definitely on what’s already a long list of admirers for the Valley’s newest gem.

A large part of what I think makes a concert venue feel comfortable is scale—and that’s something Crescent Ballroom, with a max capacity of 543, nailed spot on. The knee-high stage is the perfect height: low enough that you feel connected and immersed in the performance but raised just enough that the band can be seen from anywhere in the room.

Instead of bulky and obtrusive speakers flanking the sides of the stage, Crescent’s are smaller and mounted to exposed beams overhead, pointing down at the crowd delivering crystal clear sound. Large, boxy bleachers on either side of the audio booth line the back wall and create four tiers with the top row about six feet off the ground. The end result is a space that’s comfortable and inviting; open but not so much that you feel lost. The front room has a similarly relaxed feel: a wooden bar accented by simple hanging lights on one side of the space and a tiny stage in front of a painted white brick wall on the opposite. The walls lining the street open up to two patios filled with high tops that stretch out onto the sidewalk.

This front section of the building is a lounge that will be open from 4 p.m. to 2 a.m. every day with a full bar, free live music and eventually serving food from Cocina 10, the latest undertaking by Chris Bianco, of Pizzeria Bianco & Pane Bianco, and Doug Robson of Gallo Blanco. Expectations are high for what this duo will dish up (a menu of “Mexican-accented road food” according to the venue’s website). If their stellar reputations along with the execution of the rest of Crescent Ballroom are any indication—I’m sure it won’t disappoint.

A great space, quality sound, a full bar, spectacular service, the promise of great food—and I haven’t even touched on the lineup of bands they’ve got in store. The Album Leaf, St. Vincent, M83, Deer Tick, Shawn Colvin, We Were Promised Jetpacks and more are all booked from now through December.

I could go on, but with a calendar full of such solid programming set for the next few months, it’s probably best for you to check it out yourself.   When I say Crescent Ballroom is going to lead to my eventual death, I may be exaggerating slightly. Death is a little extreme; but if you see me ringing in 2012 unemployed, hung over and standing on the 7th Street I-10 overpass holding a sign that says, “This is Charlie Levy’s Fault – Will Work for Tickets,” don’t say I didn’t know what was coming.